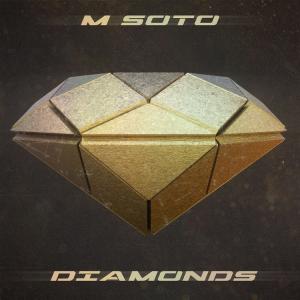 The “Diamonds” track begins with a twenty-one second introduction that creates a delicious sense of tension and prepares the listener for compelling vocals, a perfect beat, rich bass and ambient keyboard riffs. The main vocal from M Soto proves his professional talents. His stylistic vocals seamlessly combine with the elegantly produced, smooth instrumental vibe.

To date, M Soto’s discography includes the release of two albums along with his eight singles and EPs. Some of M Soto’s most popular tracks include the popular tune “Throw That Dough,” which has over one hundred and seventy-seven thousand confirmed streams. His release “Blessed” has racked up over eighty-seven thousand streams, and Soto’s “My Days” has been streamed sixty-three thousand times.

M Soto has created a huge buzz in the world of streaming music, and since 2019 has been a well-known emerging artist and producer at the center of the social media music scene. M Soto is a natural musician and has loved music since his childhood. The Brooklyn-based songwriter has honed his craft over the years and his notoriety popped when he began to release his singles, EP’s and albums.

The musician has over 27,000 monthly listeners on Spotify, and credits his talents to those who have always believed in his becoming the artist that he is today. His unique and authentic sound speaks volumes to experience, community connection and to the world. He is inspired by the universe and writes from his heart.