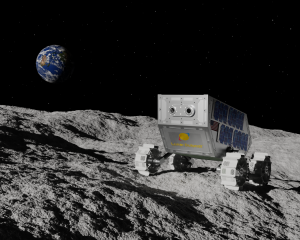 Rendering of Lunar Outpost’s MAPP rover on the lunar surface.

GOLDEN, CO, USA, July 22, 2021 /EINPresswire.com/ — Lunar Outpost is supporting Nokia’s LTE/4G NASA Tipping Point project with Intuitive Machines, a leader in cutting-edge technologies for space, to build, integrate and test the first-ever LTE/4G network on the surface of the Moon. One of the primary objectives of the Nokia technology demonstration is to validate that Nokia’s LTE/4G technology can support proximity communications for lunar operations and future human spaceflight, as well as to begin building important infrastructure that will enable rapid growth in the cislunar economy.

In late 2022, an Intuitive Machines Nova-C lander will carry several payloads, including a Nokia LTE/4G communications system to the lunar South Pole. This system will allow the Nova-C lander to provide a wireless communications network on the lunar surface and act as a communications gateway to Earth. Nova-C will also carry Lunar Outpost’s M1 Mobile Autonomous Prospecting Platform (MAPP) rover, equipped with Nokia’s LTE/4G user equipment and deployable antennas. Once on the lunar surface, MAPP will drive off the lander, entering an extremely compelling and demanding lunar environment to study the capabilities of Nokia’s lunar LTE/4G communications system. Over the course of its 12-day mission, MAPP will traverse the lunar surface and enable Nokia to collect performance data on its LTE/4G system. In demonstrating an effective LTE/4G architecture on the Moon, Nokia, Lunar Outpost, and Intuitive Machines will revolutionize the New Space technology ecosystem, providing high-throughput, long-range, and low-latency communications on the lunar surface.

Much of the opportunity in the cislunar economy will be for technologies in GEO (22,000 miles above the Earth’s surface) and beyond, especially on the lunar surface itself. A lunar surface flourishing with productive autonomous systems, space mining operations, and eventually human habitats will allow access to the vast and untapped economic potential of interplanetary commerce; however, certain key challenges must be addressed for this possibility to become a profitable reality. Perhaps most pressing amongst these challenges is providing an effective means of communication between the manifold entities that will participate in complex surface operations, including rovers, landers, astronauts, ground stations and scientific and experimental equipment. All these entities will need to share vast amounts of data with each other to fulfill their respective missions and conduct business. But due to the extremely challenging nature of the environment, there are currently no deployed communication technologies on the lunar surface that can meet the demands of the new space technology ecosystem.

“Intra-lunar communication will be a linchpin for large-scale future efforts on the Moon,” said Justin Cyrus, CEO and founder of Lunar Outpost. “And it’s still a largely unsolved problem. Our work with Nokia and Intuitive Machines will pave the way for a sustainable presence in cislunar space.” Cyrus also noted that the MAPP rover is uniquely qualified to serve as the mobility platform for this crucial mission. The rugged environment of the lunar South Pole will not be a problem for MAPP, as the temperature range and rough terrain are well within the rover’s operational capabilities.

“We are excited to utilize the Lunar Outpost MAPP rover for this mission. The MAPP rover provides the payload, mobility and communications capabilities needed to successfully study the capabilities of the LTE/4G communications system on the surface of the Moon,” said Thierry Klein, VP of the Integrated Solutions and Experiences Research Lab at Nokia Bell Labs.

This announcement adds to a list of recent accomplishments for Lunar Outpost including being selected for the first ever AWS Space Accelerator, helping make the first Oxygen on Mars, and receiving the first-ever contract to sell space resources to NASA.

Lunar Outpost’s rover will also carry several other commercial and scientific payloads on-board during the mission, scheduled for Q4 2022. If you are interested in purchasing payload space and mobility services for your organization, contact our sales team here.

About Lunar Outpost:
Lunar Outpost is an industry leader in robotics for the lunar surface and extreme terrestrial environments, as well as in space resources. Recent selection for the first-ever contract for collection and sale of space resources with NASA, creation of oxygen on Mars via MOXIE on the Perseverance rover, and participation in the AWS Space Accelerator sponsored by Seraphim Capital, have cemented Lunar Outpost as a pioneer in the New Space Economy.

How PTR is Overcoming the 2021 Global Microchip Shortage