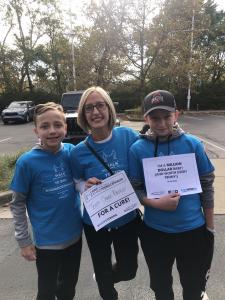 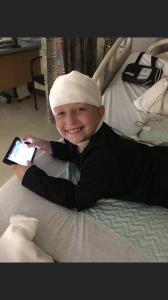 Chase has had 9 brain surgeries to treat his hydrocephalus. 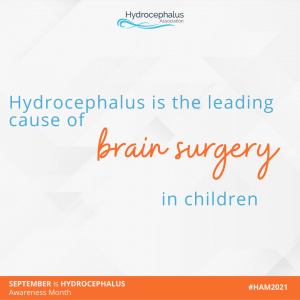 Hydrocephalus is the leading cause of brain surgery in children.

Will take part in Cincinnati WALK to End Hydrocephalus on Oct. 3rd

It’s important for us that we raise funds to help drive more research into improved treatments for hydrocephalus.”
— Bethann Lorenzo

CINCINNATI, OH, UNITED STATES, September 28, 2021 /EINPresswire.com/ — Chase Parker Lorenzo was just 9 months old when he was diagnosed with hydrocephalus, a life-threatening neurological condition that has no cure and can only be treated with brain surgery. Now at 14 years old, Chase has endured nine brain surgeries to treat his condition. Hoping to raise awareness and funds for research, Chase’s mom Bethann Lorenzo will take part in the Cincinnati WALK to End Hydrocephalus on Sunday, Oct. 3 at Friendship Park in Cincinnati.

“The toughest part about parenting a child with hydrocephalus is that things can change from one night to the next. Chase had been doing well for several years, but then in the past year alone he ended up having to have three brain surgeries because his shunt wasn’t working correctly,” said Bethann, who will participate in the Cincinnati WALK along with her husband Larry and their entire family. “There are so many unknowns with this condition. One second your child feels fine and the next day he’s waking up with seizures and vomiting and you just hope it’s the flu and not his hydrocephalus.”

While Chase was born with hydrocephalus, it took several months before he was officially diagnosed. Today, as a result of his condition, he also suffers from seizures from epilepsy and walks with a limp.

Over 1 million Americans are currently living with hydrocephalus, a complex condition marked by excess accumulation of cerebrospinal fluid on the brain. However, anyone at any time can develop hydrocephalus from a brain injury, tumor, or infection, and some people over 60 develop Normal Pressure Hydrocephalus, which is often misdiagnosed as Alzheimer’s, dementia or Parkinson’s. Like many hydrocephalus patients, Chase has a device called a shunt implanted in his brain to drain the excess fluid into another part of the body. Shunts save lives, but frequently malfunction, become infected, or blocked. It is not uncommon for a person with hydrocephalus to have ten or more shunt-related brain surgeries throughout their lifetime.

The Cincinnati WALK to End Hydrocephalus is one of over 40 WALK events hosted by the Hydrocephalus Association each year. Funds raised from the WALK supports the Hydrocephalus Association’s research efforts, as well as its free support and education programs for families around the country.
“We are participating in the WALK because it’s a great way to connect with other families impacted by this condition and we wanted Chase to meet other kids and teens like him. But it’s also important to us that we raise funds to help drive more research into improved treatments for hydrocephalus. It would be great if there was a treatment that only required one brain surgery in a person’s lifetime!” Bethann said.

To learn more about the Cincinnati WALK to End Hydrocephalus, visit http://www.hydroassoc.org/cincinnatiwalk.