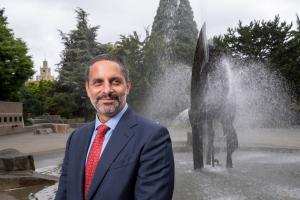 Seattle U President Eduardo Peñalver on the Seattle U campus 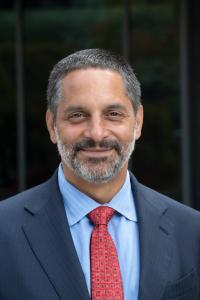 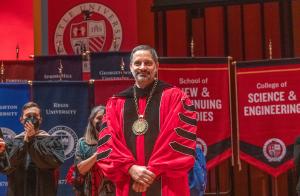 Seattle U President Eduardo Peñalver at his inauguration ceremony on Sept. 24

Eduardo M. Peñalver made history at Seattle U. He is its first Latino president and the first layperson to take the helm.

Our mission of educating and empowering students means preparing them to lead, teaching them to question and to think, equipping them with the skills to persuade those with whom they disagree.”
— Eduardo Peñalver

SEATTLE, WA, USA, October 6, 2021 /EINPresswire.com/ — When he was named the new president of Seattle University earlier this year, Eduardo M. Peñalver made history at the 130-year-old Jesuit Catholic institution. He is its first Latino president and the first layperson to take the helm since Seattle U was founded in 1891.

Peñalver, 48, was inaugurated at Seattle’s Benaroya Hall on Friday, Sept. 24. He is the university’s 22nd president and its first in 24 years. Peñalver’s remarks, a highlights video and more from the two days of official events can be viewed on the inauguration website.

Prior to being named president, Peñalver served as the dean of Cornell Law School from 2014 until 2021. He is a Rhodes Scholar and a professor of law who clerked for former U.S. Supreme Court Justice John Paul Stevens.

“A presidential inauguration is also a celebration of an entire university. A time to reaffirm our commitment to our mission. And a time to reimagine the possibilities of our bright future,” said Seattle U Board of Trustees Chair Nicole W. Piasecki.

“Like this city, Seattle University has a local feel and global reach. Seattle U’s location in the heart of a global innovation hub presents a wealth of opportunities. Our strong tradition of academic rigor and progressive Jesuit values create an educational and community experience that mirrors the innovative spirit and progressive values of Seattle itself.”

Piasecki said “great leadership is absolutely critical to achieving the bright future we envision and strive toward. Seattle U has been blessed with exceptional, strong and community-connected presidents. Today, we continue that tradition while making history. Under President Peñalver’s bold leadership, we are poised to move into that future with confidence.”

Peñalver opened his inauguration remarks by noting that “Seattle University is unique among the universities of the Pacific Northwest and arguably in the country. Unique even among the tightly knit community of Catholic and Jesuit colleges and universities, unique in our distinctive vision to become a university known for our innovative, progressive, Jesuit and Catholic approach to higher education.”

Peñalver said that Seattle University’s mission statement “wisely commits us to ‘empowering’ our students to become ‘leaders for a just and humane world.’ Our mission of educating and empowering students means preparing them to lead, teaching them to question and to think, equipping them with the skills to persuade those with whom they disagree.

“And it means helping them to appreciate the beauty and the blessings in the world around us, even as we recognize its imperfections and injustices. To realize Seattle University’s bold ambition that there be “nowhere better” for students to grapple with society’s great challenges, we have our work cut out for us.

“As we look to the future and consider what stands between our imperfect present and ‘somewhere better,’ three great challenges loom,” he said.

One is the existential threat of global climate change and ecological sustainability, which imperils our very survival. This summer’s heat dome, not to mention the wildfires and hurricanes, drive home the imminence of this threat and the need to develop new ways of thinking and living.

“Seattle University, which this year will achieve Scope 2 carbon neutrality, needs to be at the forefront of this effort, which will require all of our creativity and intellectual rigor,” said Peñalver.

A second grave challenge is the scourge of persistent racial injustice coupled with ever-widening economic inequality and other forms of social exclusion and subordination that threaten our sense of common purpose. The events of the past 18 months, particularly the protests in the wake of George Floyd’s murder, have underscored the urgency of understanding and addressing the deep structures of injustice we have inherited.

“If our multiracial, pluralist democracy is to survive, our students need to understand those structures so that as the leaders for a just and humane world they can help to dismantle them.”

The third great challenge of our time is rapid technological transformation—the so-called fourth industrial revolution—that promises exciting changes in our ways of interacting and of doing business, but which also facilitates the spread of misinformation and extremism.

“No matter what field of study our students have chosen, from political science to computer science, they need to understand data and technology, not just in their technical dimensions, but through an interdisciplinary lens that includes their impact on human beings and on our communities.”

He said that rapid technological change also opens doors to new possibilities, including expanding the university’s capacity to reach students where and when they are.

“In the coming months and years, Seattle University will take advantage of those new muscles to roll out programs of study, making use of hybrid online modalities that allow us to draw on the best of both in-person engagement and online flexibility, growing our graduate, professional and executive educational programs and making them more accessible.”

More about President Peñalver
Peñalver received his bachelor’s from Cornell’s College of Arts and Sciences in 1994 and his law degree from Yale Law School in 1999. As a Rhodes Scholar, he received his Master of Arts in Philosophy and Theology at Oriel College, Oxford.

Peñalver grew up in Puyallup, WA, and was raised in a Catholic family. His family moved there when he was two years old for his father’s pediatric residency at the University of Washington Medical School. His parents and four siblings all live in Puyallup and Tacoma.

Learn more about Peñalver, Seattle U Office of the President.

About Seattle University
Founded in 1891, Seattle University is a Jesuit Catholic university located in downtown Seattle’s First Hill neighborhood. One of the Northwest’s largest independent universities, Seattle U is home to more than 7,000 undergraduate and graduate students and more than 85,000 alumni globally. With a vibrant and green campus in the heart of one of the world’s leading regions for innovation and progress, Seattle U is on the forefront of empowering students for successful careers and a just and humane world.