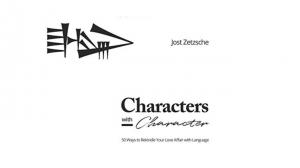 Characters with Character: 50 Ways to Rekindle Your Love Affair with Language

Sometimes, you can just let language happen to you. And it’s got beauty. That’s true for spoken language as much as it is for written language.”
— Jost Zetzsche

LOS ANGELES, CA, USA, May 4, 2021 /EINPresswire.com/ — Translation and localization industry thought leader Jost Zetzsche authored a new book celebrating unique writing systems across the world. For language enthusiasts, this is a celebration in itself.

“Character with Character: 50 Ways to Rekindle Your Love Affair with Language,” published by MultiLingual Media, is an effort to rekindle the personal relationship with written character specimens. The book explores written language specifically, providing insight on human expression through systems of writing, which are, as Zetzsche relates, “beautiful and mind-blowing.”

In a recent interview with Nimdzi Insights’ Co-Founder Tucker Johnson, Zetzsche makes it clear that while writing systems, do have an important place in society and increase the survival chances of languages, certain cultures and languages have survived orally. Language is primarily spoken. Written language is not the primary expression.

The work has taken Zetzsche ten years to compile and is presented in an unconventional format: no page numbers. “I imagine the book like an art gallery. You can do what you want.”

“Characters with Character” is not Jost Zetzsche’s first book. Zetzsche is known across the industry for his work as an independent translator, consultant, and author. Past publications have made their way into academic curriculums and workspaces of language enthusiasts and professionals.

Zetzsche’s previous books include “Found in Translation: How Language Shapes Our Lives and Transforms the World,” co-written by Nataly Kelly, VP of Localization at HubSpot, “Translation Matters,” and “Bible in China: The History of the Union Version or the Culmination of Protestant Missionary Bible Translation in China.”

“Characters with Character” is available not only for purchase through MultiLingual Media and other distribution outlets but for customization as well. Language service providers (LSPs), for example, are able to buy the book in bulk and ship to clients with custom branding.

Any reader, Zetzsche tells Johnson, will be able to marvel at the beauty of language, at the calligraphy, and at how technology expresses that beauty. “Sometimes, you can just let language happen to you. And it’s got beauty. That’s true for spoken language as much as it is for written language.”