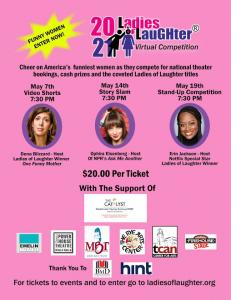 The stand-up competition prizes include the Professional Winner receiving close to $10,000 in paid bookings with the Ladies of Laughter National Tour at theaters with previous years’ winners. All winners and runner-ups will receive a case of Hint water, compliments of our Hint water sponsors.

“Since it was first introduced into comedy clubs in 1999, the Ladies of Laughter series has awarded comedy bookings, major publicity, and thousands of dollars to aspiring comediennes and has been a driving force behind women getting to the next level in their comedy careers,” said Executive Producer, Peggy Boyce.

The events have led contestants to appearances in local and national media, including ABC-Television, Comedy Central, and FOX-TV, and even featured stories in the New York Times, with winners receiving major paid bookings from comedy clubs and theaters across the United States.

In the stand-up comedy division, Ladies of Laughter have separate categories for “Professionals” and “Newcomers.” Contestants chosen to compete will be judged on audience response, originality, material, and delivery by a panel of entertainment industry judges.

Those interested in entering the Ladies of Laughter competition should go to www.ladiesoflaughter.org. Contestants must be eighteen years or older and must enter before Tuesday, April 20, 2021, to be considered for the 2021 competition. Contestants are urged to apply early.

The 2021 Ladies of Laughter Event Schedule:

About Ladies of Laughter: From 1989-1992, New York City comedy show producer/comedienne Mary Jo Wobker was instrumental in giving many new comediennes their start in stand-up comedy. After Mary Jo’s sudden death in 1992, Peggy Boyce and Mary Jo’s friends created a women’s stand-up comedy competition in her name. The “Mary Jo Comedy Awards” served as a platform for women comediennes to gain publicity and cash to further their careers. In 1998, the program was born in an un-air-conditioned YWCA in Ridgewood, New Jersey. For five weeks, amateur and professional comediennes from all over New Jersey signed up to stand-up and tried their hand at comedy in front of standing-room-only crowds. In 1992, based on its success, Bud Light signed on as the title sponsor, and the Ladies of Laughter® was ushered into comedy clubs, Atlantic City Casinos, and even Madison Square Garden. Now called the Ladies of Laughter®, funny women around the United States, Canada, England, and Australia, regularly apply for participation.