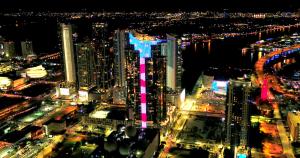 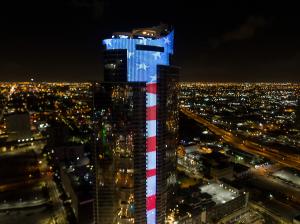 It is a shining symbol of patriotism and a sort-of “Hiring-Now” sign – an alert that there is a national shortage of construction workers and nearly 400,000 unfilled jobs, across America, according to the U.S. Labor Department.

The L.E.D. stars and stripes are being displayed on the 60-story tall Paramount Miami Worldcenter tower, in downtown Miami.

Paramount, which features the world’s most advanced L.E.D. animation system, features a 700-foot-tall rippling wave of red and white stripes, through its center column.

On its rooftop crown is a 150-foot-high by 300-foot wide moving image of five-pointed white stars against a fluttering field of blue.

From Sunday through Monday night, at the top of every hour; for two minutes; beginning at 5:00 a.m. until 7:00 a.m.; and from 7:00 p.m. to midnight; the nation’s tallest electronic animation lighting system will display the stars and stripes.

Across America, there is a shortage of construction workers ranging from bricklayers to electricians to pipe-fitters and welders.

The shortage is due to several factors, including a lack of interest among younger Americans to enter the construction industry; the demand to rebuild cities and towns devastated by hurricanes, forest fires and floods; and, because many workers are immigrants, stricter regulations for entering the country have made it tougher for these people to obtain work visas.

Miami Worldcenter has implemented one of the country’s most-innovative jobs programs. About 25 percent of the 10,000 people building the massive Miami Worldcenter are unskilled residents recruited from nearby neighborhoods with double-digit unemployment rates. Those people are provided on-the-job training. They are paid nearly twice the state’s $8.65 minimum wage. Many receive benefits and opportunities for advancement.