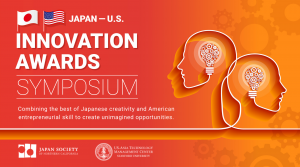 Tomoko Namba founded DeNA Co. Ltd. in Tokyo in 1999 and as CEO built the firm into a major Japanese mobile content & services company and a worldwide technology conglomerate. Continuing on the DeNA board after stepping down from CEO in 2011, Ms. Namba became the Executive Chairman from 2017. She also recently founded and serves as Managing Partner of Delight Ventures, an early-stage venture capital firm. This year, Ms. Namba again made history when she became the first-ever woman to be named to be a Vice Chair of the Japan Business Federation (Keidanren) in the 75-year history of Japan’s most powerful business association.

The 2021 Japan-U.S. Innovation Awards Symposium will be presented online-only in two parts: Part A on July 8 includes the presentation of Emerging Leader Awards to two late-stage growth companies that are transforming an industry or value chain, and Part B on July 15 from 4:30-7:30 PM Pacific Time (July 16, 8:30-11:30 AM Japan Time), in addition to Ms. Namba’s keynote, includes the Innovation Showcase featuring five exciting Japanese startup companies of interest to Silicon Valley and world audiences. Awardees will be announced in subsequent press releases. The Japan-U.S. Innovation Awards Program, which is the longest running program in the Bay Area that highlights innovation and entrepreneurship links between Silicon Valley and Japan, has recognized over 43 outstanding American and Japanese companies with unique technologies and business ideas that are disrupting their respective sectors.

For more information on the Symposium, including speakers and participants, and to register, please visit https://www.usjinnovate.org/.

Japan Society of Northern California (https://www.usajapan.org/): Since its founding in 1905, the Japan Society of Northern California has advanced US-Japan mutual understanding in a global context. The Society offers an array of programs and networking opportunities for people and organizations in the Bay Area with a strong interest in Japan. It is the go-to place for US-Japan insights, opportunities, collaboration, and networking. The Japan Society is a dynamic link connecting the world-renowned innovation and entrepreneurial ecosystem of San Francisco/Silicon Valley to a resurgent Japan.

Stanford University US-Asia Technology Management Center (https://asia.stanford.edu): The US-Asia Technology Management Center (US-ATMC), is an industry-funded center in Stanford University under the Stanford Global Studies initiative. Established in 1992, the US-ATMC conducts education and research into innovation and emerging business trends in technology-intensive industries. Its courses and public programs provide Stanford students and the Silicon Valley community with knowledge and analytical capabilities that are important to global success in high-tech fields in the 21st century.