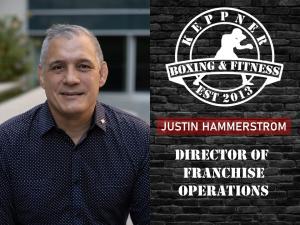 “Justin brings a massive amount of knowledge and experience to the team and will ensure the Keppner brand steps out of its micro emerging phase into a large and well built franchise system over the coming years.” said Keith Keppner, Co-Founder and CEO of Keppner Boxing Franchises.

Prior to joining the Keppner team, Justin served as Director of Corporate Training and R&D for 9Round during their expansion from 40 units to 600, National Sales Rep for XGT, Operations Consultant for Buddha Warriors and Head MMA Coach for UFC Gym in Greenville, SC. He has also worked with many other national brands including Red Effect Fitness and Hydrodog.

“This is an exciting new franchise concept that is truly bringing something to the table that is different from all the rest in the boxing and fitness space. I look forward to being a part of this brand’s expansion as we start onboarding more franchise partners across the country,” said Hammerstrom.

More information about the Keppner Boxing franchise opportunity can be found at https://keppnerboxing.com/services/Franchise.

Contributing to the Ending of Veteran Homelessness