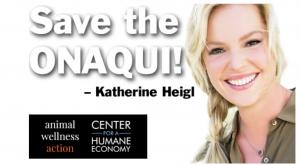 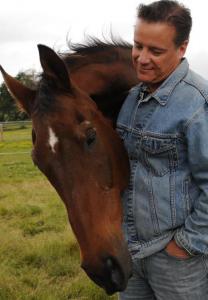 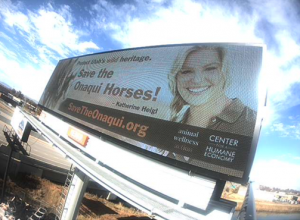 They should be managed humanely on the range by the Bureau of Land Management, not chased down and trapped with helicopters.”
— Scott Beckstead, director of campaigns at AWA and CHE

SALT LAKE CITY, UTAH, USA, May 26, 2021 /EINPresswire.com/ — Animal Wellness Action, the Animal Wellness Foundation, and the Center for a Humane Economy and actress Katherine Heigl are appealing to Interior Secretary Deb Haaland to stop the mass round-up and removal of perhaps 80 percent of the famed and beloved Onaqui wild horses of western Utah. The Center for a Humane Economy is financing billboards, throughout Utah featuring the Heigl that call on the federal government to leave the horses be.

“With their historic place on the public lands of Utah, the Onaqui horses are living treasures that contribute to the beauty of the Great Basin Desert, as well as the economic vitality of nearby communities,” said Katherine Heigl, who lives in Summit County and keeps horses at her ranch in the Kamas Valley. “Instead of cruel helicopter roundups, I call on the Bureau of Land Management to leave the Onaqui horses on the land, manage them humanely with fertility control, and limit livestock grazing to protect the ecosystem.”

“As a descendant of the early Mormon pioneers who settled Utah, I feel a strong personal connection to the amazing Onaqui horses,” said Scott Beckstead, director of campaigns for Animal Wellness Action and Center for a Humane Economy. “They occupy a special place in the history and culture of Utah and have captivated the imagination of admirers and advocates the world over. They should be managed humanely on the range by the Bureau of Land Management, not chased down and trapped with helicopters.”

The roundup is scheduled to begin July 12 and will result in between 300—400 of the 500 horses being permanently removed from their Herd Management Area (HMA).

Heigl is featured with a wild Onaqui mare and foal, and viewers can find a link to take action. Action takers are encouraged to ask U.S. Secretary of the Interior Deb Haaland to put a stop to a roundup that’s been planned under her watch.

The photo of the horses on the billboard was captured by Jen Rogers, who owns and operates Wild Horse Photo Safaris, a Tooele-based business that features tours of the area and viewing of the wild horses on the range they call home. Ms. Rogers has been a leading voice in the effort to protect the Onaqui horses and educate the public about their place on Utah public lands.

“As with the billowing wind blowing with reckless abandon in the West Utah desert, the Onaqui wild horses are found to be running age-old trails ground into the dirt by distant ancestors,” said Jennifer Rogers, owner of Wild Horse Photo Safaris. “Their history is deep here in Utah and they symbolize all that is wild and free. Revered by many far and wide, they bring locals and tourists alike to an otherwise barren landscape and serve as both a delight and a daily reminder of all that is right with family bonds, structure, unity, and loyalty. And it’s in this desert they should stay.”

Descended from horses used by pioneers and native tribes in the late 1800’s, the Onaqui horses are known for their robust beauty and their ability to thrive in the harsh environment of the Great Basin Desert of western Utah. They are a favorite among wild horse photographers and enthusiasts, and are believed to be the most popular and photographed wild herd in the country. Tourists from all over the country, and even the world, travel to Utah to view and photograph their favorite animals, including stallions with names like Charger, Goliath, Buck, Moondrinker, with glimpses of the herd’s elder statesman, Gandalf (also known as “Old Man” by some), being the most coveted prize.

The BLM claims there is insufficient forage for the horses on their HMA, yet the agency has approved the area for grazing by over 25,000 livestock. Livestock greatly outnumber the horses currently on the HMA, yet the agency has announced no plans to reduce or eliminate private grazing.
Animal Wellness Action (Action) is a Washington, D.C.-based 501(c)(4) organization with a mission of helping animals by promoting legal standards forbidding cruelty. We champion causes that alleviate the suffering of companion animals, farm animals, and wildlife. We advocate for policies to stop dogfighting and cockfighting and other forms of malicious cruelty and to confront factory farming and other systemic forms of animal exploitation. To prevent cruelty, we promote enacting good public policies, and we work to enforce those policies. To enact good laws, we must elect good lawmakers, and that’s why we remind voters which candidates care about our issues and which ones don’t. We believe helping animals helps us all.