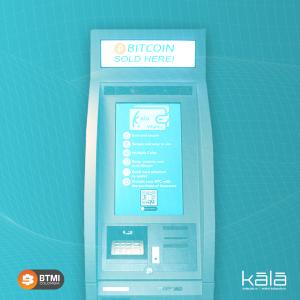 Kala and BTMI team up to bring crypto to the masses

Our partnership with BTMI reflects our mission to give human beings around the world a way to secure assets and increase their own financial stability.
”
— Curtis Olayan COO Kala Blockchain

LEHI, UTAH, UNITED STATES, July 1, 2021 /EINPresswire.com/ — BTMI and Kala head toward the equator in their quest for massive cryptocurrency adoption. Two ATM-style bitcoin machines are on their way to the city of Medellín in Colombia.

“We have been consistent in our approach to making cryptocurrency accessible to everyone…especially those who are having a difficult time being part of the current traditional banking system. Fiat’s wild volatility in some parts of the world has shined a light on the benefits of cryptocurrencies and their global acceptance. Our partnership with BTMI reflects our mission to give human beings around the world a way to secure assets and increase their own financial stability.” said Curtis Olayan, COO of the Kala Blockchain Project

The Kala Blockchain Project and BTMI (Bitcoin Teller Machine International) teamed up over a year ago. Their partnership was an easy union between like-minded crypto enthusiasts. In simple terms, both parties believe crypto is a global currency solution.

Why Colombia?
Latin America in general has shown an enormous amount of support for blockchain and cryptocurrencies. The ease of sending coins and universal access has proven to be irresistible in many Latin markets. El Salvador recently announced that Bitcoin will be considered legal tender nationwide on September 7th.
El Salvador’s announcement gives tremendous momentum to regional acceptance. Many Bitcoin supporters feel excited at the possibility that this will create a domino effect of BTC adoption in Central and South American countries. This announcement was tremendous validation for Kala Team members who have worked tirelessly for years to promote the power of blockchain applications.

Kala and BTMI plan on continuously placing their machines all over Latin America in the near future. The importance of these machines can’t be overstated. They help overcome the previously difficult process of garnering much-needed BTC.