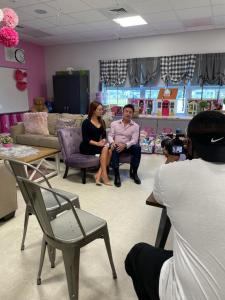 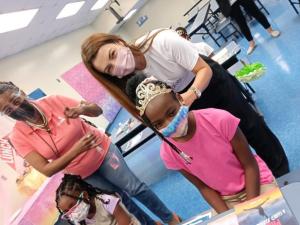 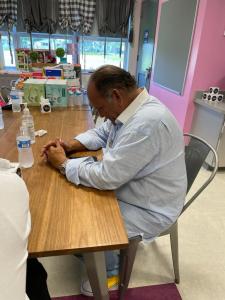 I have done missionary work all over the world, and I never realized we have people with these basic human needs right in our backyard.”
— Joseph Milton

But on October 11, the Embrace Girls Foundation will honor its newest supporters, Florida developers Joseph and Alexandra Milton, with one of its signature afternoon tea parties. The festivities are a byproduct of the Milton’s almost three-decade long friendship with Embrace sponsor Steven Gurowitz, CEO of luxury interior design firm Interiors by Steven G.

The Embrace Girls Foundation Inc. is a non-profit organization that provides uplifting, girl-centric programming for hundreds of girls in several public and private elementary and middle schools in Miami/Dade and Broward counties.

Gurowitz said he knew the Miltons and Embrace Girls Foundation Founder and CEO Velma Lawrence were a perfect fit.

“My relationship with Joseph Milton goes back over thirty years,” said Gurowitz. “Joseph heard me talk about Embrace and saw some of their social media. So, one day I told him Joseph, you would love Embrace Girls and I would love the opportunity to introduce you to Velma.

“A week or two went by, and then Joseph called and said, “Let’s roll.”

Joseph Milton is president and CEO of J. Milton & Associates, the Coral Gables, Fl., based real estate firm started by his late father, Jose, which he and his brothers now run. Since its 1963 founding the company has built more than 50,000 housing units in South Florida, much of it multi-housing.

“I’ve known Steven since we got into the condominium business in 1993,” Milton said. “Besides being an incredible businessman, Steven is an incredible designer, the best I’ve ever met in the condo industry, because he makes things work economically for you as you’re designing.

“Steven has a huge heart and is an incredibly compassionate person,” Milton said. “God made us for a purpose, and Steven G has found his purpose with Embrace Girls.”

It was a fortuitous moment for the Milton’s to meet Embrace.

Milton’s devout Christian mother, Nilda, instilled in her family the belief that one must give back to the community.

“Growing up, if we were going to an amusement park in the afternoon, we had to go and work with a charity in the morning,” said Milton, who, since 1990, has served on the Board of Alfalit International, a non-profit that funds and promotes teaching math, reading, and writing as well as job skills in impoverished communities in over 25 countries around the world.

Milton has done Alfalit missionary work in Liberia, West Africa with former Liberian President Ellen Johnson Sirleaf. The group is also active in Angola, The Democratic Republic of Congo, and Southern Sudan, and has run programs throughout Central and South America.

But the pandemic made visiting foreign lands unsafe.

“We can’t travel during the pandemic, but we’re trying to figure out how we can serve because that is the commitment we have with God,” Milton said. “We were looking to see how God would lead us, and he led us to another organization and Embrace Girls.

“We really see the hand of God working.”

“We started getting involved with Embrace Girls, which is an amazing, amazing program,” Alexandra Milton said. “Velma is creating futures for these girls.”

For their first meeting, Lawrence took the Miltons and Gurowitz on a tour of the schools where Embrace has ongoing programs, then to the communities where Embrace girls live.

It was an eye opener.

“I introduced (the Miltons) to Velma, and they loved the foundation,” Gurowitz said. “They were very surprised as well, when we took them to the school where the girls meet, and they realized Embrace serves a very diverse group.”

“Velma is real,” Milton said. “Just go be with her and see it. Then she tells you the cost of the program to operate for the entire year and you say that’s not possible, because if I was to send my child to school where they get that kind of personal attention, it would cost more than that.”

But it was the neighborhoods some Embrace girls call home that stunned the Miltons.

“It’s really an awakening experience to see the basic human needs we have in our own country,” Milton said. “I have done missionary work all over the world, and I never realized we have people with these basic human needs right in our backyard.”

The Milton’s commitment to the Embrace mission was immediate. A half hour after the visit, the Miltons made a substantial contribution, Gurowitz said, and Alexandra Milton has met with the Embrace team and program members on several occasions.

“Velma protects these girls like I have seen few people do,” Milton said. “You can only do that when you have that relationship with God. You can’t buy that.”

The Embrace Girls Foundation will hold an Oct. 11 tea party honoring the couple in the Rose Café at the Milton Tower on Sunny Isles. Milton said he plans several surprises for the group.

“This is an opportunity to introduce the girls to the world from a professional point of view,” he said. “They’ll have the opportunity to find out what it’s like to be a CEO, a designer, a developer, an architect, or operate an office building.”

“The Miltons support of and enthusiasm for our mission is exciting,” Lawrence said. “We have a great staff and team of volunteers who are key to our success. It is truly a blessing when your work is embraced and appreciated.

“Mr. G has become Mr. E to Embrace – an exceptional, engaged and extraordinary supporter,” Lawrence said. “Introducing us to the Miltons was yet another example of his true generosity and commitment.

For more information about Embrace Girls programs call 877-466-4769, or go to the website, www.embracegirlpower.org.
—