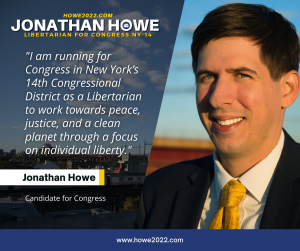 Jonathan Howe, a Queens resident and Public Defender in Bronx County Family Court, announced his candidacy for Congress as a Libertarian in NY’s 14th Congressional District today on social media. The 14th Congressional District, currently represented by Congresswoman Alexandria Ocasio-Cortez, encompasses parts of both The Bronx and Queens, including Astoria where Howe lives with his wife.

Howe shared the announcement on Facebook and Twitter accounts alongside the launch of a website, www.howe2022.com. In his announcement he wrote that his goal is to “work towards peace, justice, and a clean planet through a focus on individual liberty.” He stated that he believes in term limits, and will limit himself to two terms if elected.

In his announcement he said his campaign aims to focus on the issues facing the district and the nation from an individual rights based approach, outside of the two party system. He pledged to vote to end the war on drugs, end funding and participation in violent conflicts around the world, target the root causes of income inequality, deter pollution by making it easier to sue and prosecute polluters, and restore our rights to bodily autonomy, privacy, and free assembly.

Howe declared his candidacy for the 2022 election, scheduled to be held on November 8, 2022. As a member of The Libertarian Party of Queens, Howe will be seeking their ballot line. Assuming Congressional redistricting does not significantly change the map of the 14th Congressional District, he expects to be on the ballot alongside incumbent Congresswoman Ocasio-Cortez.