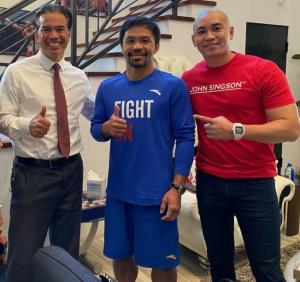 The meeting lasted few hours as Senator Manny Pacquiao speaks about corruption, drugs, criminality and many more.
The three superb men had a good time meeting and talking about their personal lives and careers.

Mr. Bonta and Senator Manny Pacquiao had met in the Philippine Senate floor back in 2019 and were very glad to had caught up again.

Its always good to consider doing things right even when no one is looking and stay close to God all the time.” He said that sadly, in politics, there are no permanent friends nor enemies and only same interest.

Bonta mentioned during his speech as California’s Attorney General appointed by Governor Gavin Newsom
“I am extremely humbled, deeply appreciative and very, very honored,” and “I am clear-eyed about the challenges that lie ahead for the state of California, the Department of Justice.” Excerpt from Los Angeles Times.

On the other hand, Manny mentioned during their conversation that he hopes to win the presidency because he wanted to have power so he can actually help criminality and corruption.