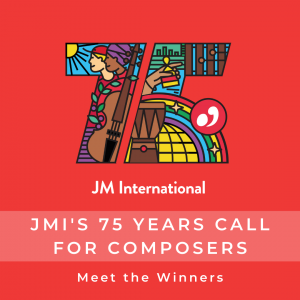 Discover the three outstanding pieces selected by the international jury!

BRUSSELS, BELGIUM, June 30, 2021 /EINPresswire.com/ — Jeunesses Musicales International (JMI) was formed in 1945, in the aftermath of the Second World War, with a vision to unite young people across the world through music. 2020 marked the 75th anniversary of the movement and as a part of the celebrations, an international competition for young composers was held in order to create new, unique compositions – bespoke scores inspired by JMI’s story.

JMI invited young composers between the ages of 18 to 35 to submit a contemporary classical piece of music suited for symphony orchestras and inspired by our remarkable JMI story, unfolding over three-quarters of a century. Three amazing works have now been selected by a professional international jury that included L. Freire (Brasil), H. Weiya (China), J. Varga (Hungary), J. Andreevska (North Macedonia) and G. Prokofiev, (UK)

After reviewing over 60 submissions from young composers from more than 20 countries across the globe, a jury of internationally renowned composers, producers, and composition professors has selected the three outstanding pieces:
-“Metamorphosis” by V. Nenadić (Serbia)
-“Ladybug in the room” by S. Uhm (South Korea)
-“Danserye VI” by Wener Put (aka. J. Van der Herten, Belgium)

The composers were tasked to capture the spirit of JMI’s vision: to bring the youth of the world together through music and that’s exactly what these winners have done. The jury remarked, “All winning pieces engage the audience with youthful energy and diversity, they show open-mindedness and outspokenness, well-mastered orchestration, sense of detail, rich fantasy and artistic consistency”.

Although 2020 marked JMI’s 75th anniversary, due to the pandemic JMI was forced to postpone their celebrations to 2021. The winning compositions are now set to be premiered at JMI’s 75 Years Celebration Concert to be held on September 30th in Brussels (Belgium) at the Maison du Post, Tour & Taxis. The event will take place within the context of the JMI Global, the annual conference and general assembly bringing together its members from over 70 countries.

Below, you can find out more about the three winning composers and what the jury had to say about each piece.
For more info, read the full article on the JMI website. To attend the 75 Year Concert please visit www.jmi.net.

“The three winning pieces demonstrate a wide array of different aesthetics, styles and creative interests among the younger generation of composers nowadays. Whether it is Werner Put’s bright, joyful and witty “Danserye VI (a rabid rose)” building on and intertwining the musical past and present, or the highly energetic and rhythmically tireless “Metamorphoses” by Veljko Nenadić, or SiHyun Uhm’s programmatic “Ladybug In The Room”, full of orchestrally rich timbres and gestures… All three, however different and youthful in their energy, open-mindedness and outspokenness in their perception of the world around, demonstrate a high level of craftsmanship, well-mastered orchestration, sense of detail, rich fantasy and artistic consistency within the chosen sonic world.” (J. Andreevska, North Macedonia)

“The 3 pieces show a high diversity of motifs and solutions compositionally speaking. The high visual effects of SiHyum Uhm, the powerful and energetic approach of Nenadic and the exceptional writing of Werner Put would definitely encourage young composers around the world.” (L. Freire, Brasil)

“Metamorphosis” by Veljko Nenadić
Born in 1998 in Smederevo, Serbia, Veljko studied composition at the Faculty of Music in Belgrade and is currently one of the most awarded young Serbian composers of our time. Some of his most significant accomplishments were the 4 first places in the competition for young composers in the USA & Golden Key Piano Composition Competition (2013, 2014, 2015 and 2017), the first place in Spain in 2013 at the competition Fidelio Musica, the first place at the Grand Prix in Moscow in 2015 and at the Slavic Music Festival. Veljko also won the 6th International Competition of Choral Composition Ennio Morricone. His music was performed with great success in Serbia and abroad (USA, Russia, Austria, Slovenia, Italy, Spain, Croatia, Bosnia and Herzegovina, Czech Republic, Algeria). In addition to contemporary classical music, Veljko is also successful in other music genres, from TV-series soundtracks to Jazz.