Jianpu Technology (NYSE:JT) Survey: Impact of the New Round of Tightening Regulation on Real Estate Market is Spreading 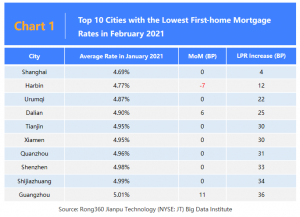 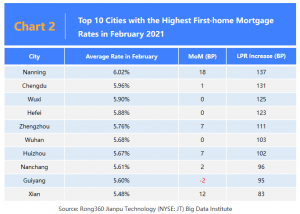 BEIJING, CHINA, March 7, 2021 /EINPresswire.com/ — Ranking: Nanning regained the No.1 with first home mortgage rate being back over 6%

With a new round of regulations triggered, the mortgage rate is expected to rise further

Beginning in late January, a number of cities released signals of tightening mortgage markets. January is typically a month with sufficient mortgage loans for many banks. While this January, along with the rising mortgage rate, mortgage loans for these banks have been tightened and some even have to suspend their loan business, demonstrating the power of the concentrated regulation. For certain other regions where the mortgage rate and loan amount were not impacted, people working at banks stated the mortgage rate might increase near term.

The new round of regulations on home mortgages and increased mortgage rates had little relation to the adjustment of 5-year LPR. On February 20, The People’s Bank of China announced the latest LPR remains unchanged, while the impact of the regulation is spreading and there may be more regions to follow the rise in mortgage interest rates in the future.

Next Article Global Insulated Industrial Rubber Mat Market to Grow at a CAGR of 4.7% during 2021-2027

Neobanking: Growing adoption of mobile and the internet across the world, increasing number of collaborations of different banks and organizations and So On PUNE, MAHARSHTRA, […]

Expedite your TTM and Reduce your Engineering Operations Cost Merraky Engineering Solutions to unveil the model for engineering innovation in electronics, at the digital event […]