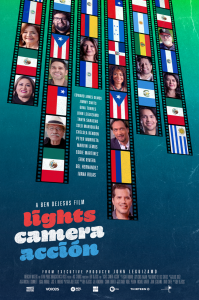 Film Premieres on October 5 Immediately Following Broadcast Premiere of AMERICAN MASTERS – Rita Moreno: Just A Girl Who Decided To Go For It on PBS

Lights, Camera, Acciòn, a copresentation of Latino Public Broadcasting’s VOCES and American Masters, is a celebration of the incredible impact Latinos have made in Hollywood — past, present and future, with a focus on the exciting new wave of talent that is transforming the industry. Featuring prominent Latino voices in film and television, this special captures the candid perspectives of talent from in front of and behind the camera, as they share their challenges, personal journeys and outlook on the future.

“When I set out to make this film, my goal was to shed light on the incredible contributions – often unacknowledged – that Latinos have made to the history and success of Hollywood since the very beginning,” says director Ben DeJesus. “I also wanted to showcase the new generation of talent that are now blazing their own trails, both on-screen and behind the scenes.”

“Visual media is such a powerful medium. It has the power to change the way we look at the world around us,” says executive producer John Leguizamo. “Ben is on a 24/7 mission to get more of our stories out there, because if people are able to see the incredible contributions that Latinx people make and have made to our society, imagine how they would look at our community. And more importantly, imagine how we would look at ourselves.”

The 24-minute documentary film premieres on Tuesday, October 5, immediately following the broadcast of American Masters — Rita Moreno: Just a Girl Who Decided to Go For It at 9 p.m. (check local listings). The film will also be available for streaming on all station-branded PBS platforms, including pbs.org/americanmasters and the PBS Video App beginning October 5.

About VOCES
Produced by Latino Public Broadcasting, the acclaimed PBS documentary series VOCES features the best of Latino arts, culture and history and shines a light on current issues that impact Latino Americans. Devoted to exploring the rich diversity of the Latino experience, VOCES presents new and established filmmakers and brings their powerful and illuminating stories to a national audience — on TV, online and on the PBS app. VOCES is supported in part by the National Endowment for the Arts. Luis Ortiz is series producer; Sandie Viquez Pedlow is executive producer. Edward James Olmos is co-founder and chairman of Latino Public Broadcasting.

About AMERICAN MASTERS
Now in its 35th season on PBS, American Masters was recently nominated for two Primetime Emmy® Awards. The series illuminates the lives and creative journeys of our nation’s most enduring artistic giants—those who have left an indelible impression on our cultural landscape—through compelling, unvarnished stories. Setting the standard for documentary film profiles, the series has earned widespread critical acclaim and 28 Emmy Awards — including 10 for Outstanding Non-Fiction Series and five for Outstanding Non-Fiction Special — 14 Peabodys, three Grammys, two Producers Guild Awards, an Oscar, and many other honors. The series is a production of The WNET Group.