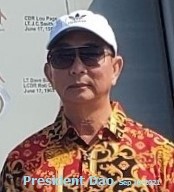 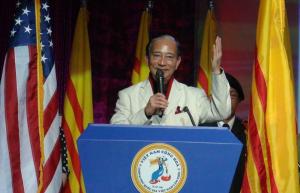 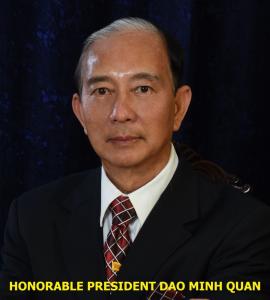 Imperial Duke Holy Tran Quoc Tuan (Đức Quốc Công Tiết Chế Nhân Vũ Hưng Đạo Đại Vương Trần Quốc Tuấn), born in 1231 in Kiep Bac (Kiếp Bạc) village, Hung Dao (Hưng Đạo) commune, Chi Linh (Chí Linh) district, Hai Duong (Hải Dương) province, with the nickname Truc Lam (Trúc Lâm), the Royal Family of Dai Viet (Đại Việt) in Tran Dynasty. In the hearts of the Vietnamese people, he is a Heavenly General who obeyed God’s orders to come down to earth to carry out the mission of protecting the country and the people for the Tran Dynasty and the whole of Dai Viet. Through his glorious three-time victory over the Mongol Yuan army from the North, he left behind countless sacred anecdotes, the Vietnamese nation’s elation, glory, and pride. Since then, his name has been lovingly and reverently called: HOLY TRAN.

He was the grandson of Supreme Emperor Tran Thai To (Thái Thượng Hoàng Trần Thái Tổ); the nephew of King Tran Thai Tong (Trần Thái Tông); son of the Peaceful king Tran Lieu (Trần Liễu), the uncle as well as father-in-law of King Tran Nhan Tong (Trần Nhân Tông). He devoted his life to supporting the four Kings of the Tran Dynasty, making significant contributions the three times to repel the Chinese invaders from Vietnam and defend the country, secure the people, and create and protect the cause of the Tran dynasty. He left behind many Works on the military, political, literary … most significantly, there are two sets of books of the great value passed down to posterity, including Military Briefing Books (Binh Thư Yếu Lược) – in 4 volumes and Van Kiep Confidential Books (Vạn Kiếp Tông Bí Truyền Thư) including two (2) volumes: the Upper book teaches military operations, economics, military maneuvers, exercises and physiognomy; the Lower book teaches horoscopes, feng shui, military mechanics, strategy, general control, defend the country, township, and serving people. Many people have received his teachings from the Brief Military book and the Upper Van Kiep Confidential Book. However, the Lower volume of Van Kiep, only his descendants can possess and receive.

In 1300, after retiring in Van Kiep, he died of old-aged disease. Before leaving the world, he arranged for his family to flee to avoid the court’s eyes and the pursuit of the enemies of the North. In the 14th century, the Patriarch Tran Thuong (Trần Thượng), the main branch of the Holy Imperial Duke Tran, made the merit of establishing Truc Lam village in Huong Tra district, Thua Thien Hue province. Because it was necessary to recruit more workers and farmers from outside to go into the village, he changed the surname from TRAN to DAO. According to Ancestors advice, he did not allow his children to study, not taking exams, to protect the safety of the clan’s origin. The lineage of the Patriarch Tran Thuong passed down to Long Live Man Dao Khuong (Đào Khương), who lived to 103 years old when the Vietnamese Communists shelled Truc Lam village on Lunar New Year in 1968 (Tết Mậu Thân), killing him. Long Live Man Dao Khuong had eight (8) sons who were very handsome, rugged, stronger than ordinary people, good at farming and ploughing, so the villagers called Eight Fairies (Bát Tiên). One of the Eight Fairies, Mr. Dao The, had to leave the village to study temporarily, and passed exams, becoming Mr. One, one of the first paratroopers’ officers of the Vietnamese National Army, the Chief Commander of Khai Dong (Khái Đông), Hoa Phat, Hoa Tuong, Hoa Khanh, Hoa Vang (Hòa Phát, Hòa Tường, Hòa Khánh, Hòa Vang) district, and the Paracel Islands. The third son of Mr. Dao The is PRESIDENT DAO MINH QUAN, whom the compatriots and the Constitution of the Third Republic of Vietnam have honored as the IMPERIAL DUKE.

In addition, Vietnamese people always remember the First Grand Duke Nguyen Trai, who, after helping King Le Thai To (Lê Lợi) to drive out the Ming army, he retired to Lychee Garden (Lệ Chi Viên). Grand Duke Nguyen Trai was the author of the national book Great Proclamation upon the Pacification of the Wu (Bình Ngô Đại Cáo). The most crucial factor in creating the victory for the Lam Son uprising, establishing the Late Le dynasty with the element of the country’s position – the hearts of the people: “To ensure peace for the people, such as the essence of humanity and justice. To eliminate violence, such as the primary aim of our soldiers.” He was the general who introduced the strategy and method of Vietnam’s first Political Warfare by using grease written on the leaves of trees to create the word “Le Loi is the King, Nguyen Trai is the General” to win the hearts of people and defeat the enemy’s mentality, thus helping King Le Thai To to defeat the Ming army from invading our country and rebuild the Vietnamese nation’s fortunes. When King Le Thai Tong visited the former General Nguyen Trai and suddenly died, leading to the Lychee Garden case in 1442, causing the three generations of Nguyen Trai to suffer unjust deaths. Nguyen Trai’s fourth wife, Mrs. Pham Thi Man, was pregnant with a drop of Nguyen Trai’s blood at that time, escaped to Thanh Hoa and gave birth to a boy child, and has passed down to the 18th generation of Nguyen Trai, who was Duke Nguyen Huu Bai (Phước Môn Quận Công Nguyễn Hữu Bài) born in 1863. He was a man of integrity, famous for his phrase “Exile the King without Kha, dig the King’s grave without Bai”, talking about the two loyal Officials of the Nguyen Dynasty who would rather lose their positions and lives than to follow the French’s orders to betray their Kings. The first was Mr. Ngo Dinh Kha (Ngô Đình Khả), the father of the late President Ngo Dinh Diem (Ngô Đình Diệm), who did not agree to sign the sentence of the exile of King Thanh Thai (Thành Thái); The second person, Nguyen Huu Bai, refused to sign the sentence of digging the tomb of King Tu Duc (Tự Đức). Their patriotism loyal reputation continues to this day. Mr. Nguyen Huu Bai had a cousin, Mr. Nguyen Van Than (Nguyễn Văn Thân), a famous railway engineer, who was instrumental in establishing the North-South railway and the Highway from Saigon (Sài Gòn) to Phnom Penh that the whole country is using. Mr. Nguyen Van Than had a third son, Doctor Nguyen Van Man (Nguyễn Văn Mẫn), who is the godson of the late President Ngo Dinh Diem, the only Vietnamese to be the valedictorian in surgery at the Sorbonne Medical University-France, and also the only Vietnamese to receive the honor of being the Director of this most famous French Sorbonne hospital. The eldest daughter of Mr. Nguyen Van Than is Ms. Nguyen Thi Hanh (Nguyễn Thị Hạnh), self-proclaimed Hanh Nguyen (Hạnh Nguyên), the owner of the Hanh Nguyen Lacquerware Union, the most famous female businesswoman in the lacquer industry in the South. Who had pioneered in rebuilding the lacquer industry and reclamation of plantations, exploiting in the cultivation of sumac in Lam Dong (Lâm Đồng) to replace the type of Thai lacquer used by the whole country today, she is the mother of IMPERIAL DUKE DAO MINH QUAN.

Mr. Dao Minh Quan is a descendant of two famous royal and loyalist clans of Vietnam. He was born in 1952 in Thi Nghe (Thị Nghè) village, Gia Dinh (Gia Định) province. According to the Astrologist Nhan Quang (Nhân Quang) and Astrologic Astronomical Method of Truc Lam geography based on the date of birth of Imperial Duke Dao Minh Quan, he was born at the time of the Zodiac, the day, month and the year of the Dragon. It is an inheritance of an authentic life of the FOUR DRAGONS – THE GREAT FLOOD (TỨ LONG ĐẠI HỒNG THỦY). This happens to only one person in 600 years. It is a zodiac sign and Horoscope, and the stars surround that by the stars: Right & Left Assistants (Tả Phù Hữu Bật), Blessing Star (Thiên Lương), Minister Star (Thiên Tướng), Celestial Life (Thiên Thọ), Power Star (Thất Sát), Tycoon (Tướng Quân), Fortune (Hóa Lộc), Seigneur (Hóa Quyền). According to the Horoscope, such a person is kind and gentle and escapes from all calamities. Those who go by His side are affected by this blessing. This is the destiny of the Real Emperor, a gentle and virtuous King who saves Vietnam and is the richest man in the world.

Eight hundred (800) years after the death of Holy Tran, Heavenly blessing has gathered enough for the Son of God to once again come to earth, bringing peace and happiness to the Vietnamese people and directing humanity to worldly peace. It is the direct descendant of Holy Tran, Mr. Dao Minh Quan, Imperial Duke, the Third President of the Republic of Vietnam. Furthermore, this event was prophesied and handed down from the Thunder Book – Heavenly Letter, 500 years ago:

The evil power will be disbanded
The DAO flag will then march jollity
MINH QUAN is the name written on it
Borrowing the destiny to reincarnate from the Three Realms.
Who were the previous Stars from Heavens?
This life will receive the light to be enlightened …

IMPERIAL DUKE DAO MINH QUAN has the world-class talent to govern the state and help humanity, including politics, military, civil and business. He is the only person who owns and has been taught about the Lower Van Kiep Secret Book, applying tactics to defeat the communists, as evidenced by the long journey written in the blood and sweat of the Vietnamese people, who accompanied him throughout 53 years ago can be verified at any time that it is true. He won the hearts of the people through his life of dedication to his people. Wherever he went, he left a mark of peace and humanity. Because He followed theistically, he is loved and protected by heaven and earth and lives in the hearts of people, not only Vietnamese people but also the international community. He advocated a long-term national policy in the way of mind and heart, using justice, love and truth to save the country – pacify the world, Regain Ancestral Land – End Populace Suffering. This is the path of peace that any country leader would want to walk alongside, and every citizen would wish to live in His Kingdom.

He is the Leader who wins the heart of God and the people that Vietnam has been fortunate to have. Vietnam is filled with blessings and luck!