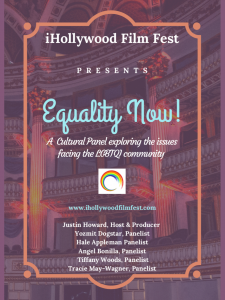 “It’s my pleasure to bring together such a diverse array of LGBTQI Artists & Performers to come together to talk about the challenges of being out in the public’s eye at a major film festival panel,” moderator Justin Howard stated. “It’s fascinating to hear such diverse and dynamic points of view!”