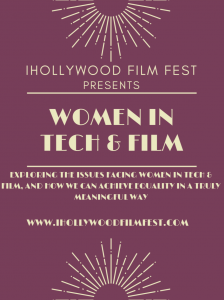 The iHollywood Film Fest is pleased to announce the ‘Women in Film & Tech’ Panel has won the ‘Most Empowering’ Audience Award!

Winning the ‘Most Empowering’ Audience Award @ the iHollywood Film Fest 2021

“I’m honored to be facilitating this panel on ‘Women in Tech & Film’,” moderator Justin Howard commented. “It’s a fierce group of women who have made it against the odds in tech & film, who are truly committed to holding the doors open for other women to create and manifest their dreams.”