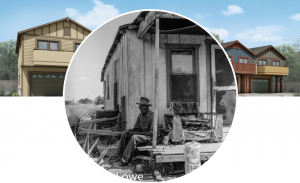 TEVISTON, CA, UNITED STATES, July 1, 2021 /EINPresswire.com/ — In the 1940’s, as the Great Migration was bringing many African Americans to major northern cities, a group of Black sharecroppers from Oklahoma went in search of a different type of life. This community hoped to find agricultural success in California but was faced with racism from local authorities and replacement by lower-wage migrant workers. Over the years, the community has fallen into disrepair and many have left for other cities to find opportunities.

In recent years, Almega Partners development company has come forth with a plan to create a thriving community in this area. The proposal includes market, retail, multi-family, and single-family developments which would create comfortable living options and economic development opportunities in this hamlet. Without this development, the area will likely continue to sink further into poverty with no commercial services to sustain its growth.

Almega has filed a lawsuit against the Teviston Community Services District (TCSD) and the complaint states that it “seeks to reverse an injustice and require the TCSD to update the date on the ‘will serve letters’ that TCSD had previously issued.” The complaint further alleges that “TCSD is now taking this opportunity to withhold the updated letter from Almega in order to extract further consideration from Almega despite Almega already providing significant consideration for the ‘will serve letters’ when the agreement was made.” Additionally, the complaint alleges that “TCSD is reneging on its fraudulent promises and breaching those contracts by claiming that it will not provide water to the Property….” Furthermore, the complaint alleges that “Almega lost a Qualified Opportunity Zone investment deal that would have made Almega a profit of approximately at least $2 million ($2,000,000.00).” (Quotes taken from Almega’s complaint filed in Tulare County Superior Court Case No. VCU283980 on August 19, 2020.)

Almega has already begun construction and has completed the installation of fire hydrants, storm drainage system including manhole and ponding basin, underground electric, gas and water utility lines and built out eight new homes in this Hamlet of Teviston, CA 93256. Almega is seeking to raise $150,000 for its legal fund to win the court battle!

Trial is set for October 25, 2021, in which Almega seeks a Court order granting the required updated “Will Serve Letter” from the Water utility plus other damages in order to finish construction of its development project.

“Jim Crow, California-style, came with a past [the Black Oakies] knew little about,” said Mark Arax in an LA Times article about the Black Oakies’ Land of Broken Promises.

Mark speaks of the migration to rural California and some of the people he found in Teviston in this video: https://www.youtube.com/watch?v=7LPBEb5PXBk&feature=youtu.be