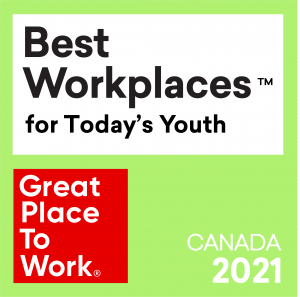 TORONTO, ONTARIO, CANADA, October 19, 2021 /EINPresswire.com/ — Horizon Media Canada, the country’s fastest-growing media agency, today was named among Canada’s “Best Workplaces for Today’s Youth” by Fortune magazine. The accolade comes on the heels of being named one of the “Best Places to Work 2021” by AdAge, alongside, “Great Places to Work in Canada” last year by renowned media outlets.

Horizon Media received the honor based on a rigorous, independent analysis conducted by Great Place to Work, which administers the national program and has been conducting culture research and workplace consulting for some 30 years. In past years, Great Place to Work has recognized the likes of Sony, Whirlpool Canada, Deloitte, Hilton, and MasterCard, among others, for their innovative and rewarding workplaces.

“It’s great to be among the ranks of such market leaders,” said Kevin Kivi, EVP, and general manager of Horizon Media Canada. “It’s especially gratifying to be recognized for what we’re building here. Just four years into Horizon Media’s expansion north, we’re already not only Canada’s fastest-growing media agency but also one of the best workplaces around.”

The Great Place to Work list is based on feedback from employees of hundreds of organizations that were surveyed. To be eligible for this list, organizations must be Great Place to Work-Certified™. Their employee rosters also must be at least 30% comprised of Millennials or younger workers – 90% or more of whom must respond positively to the following statement: “I am treated fairly regardless of my age.” The best company “award winners” were determined by the overall Trust Index score from younger workers in each respective organization.

Horizon Media
Horizon Media, Inc., the largest media agency in North America according to AdAge, delivers data-driven business outcomes for some of the most innovative and ambitious brands. Founded in 1989, headquartered in New York, and with offices in Toronto and Los Angeles, the company employs 2,400 people and has media investments of more than $9.5 billion. Horizon Media’s fundamental belief is that business is personal, which drives its approach to connecting brands with their customers and engaging with its own employees resulting in industry-leading workplace satisfaction levels (Glassdoor). The company is consistently recognized by independent media outlets for its client excellence and has earned several “Best Workplaces” awards reflecting its commitment to DEI and the life and well-being of everyone at Horizon Media.

About Great Place to Work®:
Great Place to Work is the global authority on high-trust, high-performance workplace cultures. Through proprietary assessment tools, advisory services, and certification programs, GPTW recognizes the world’s Best Workplaces in a series of national lists including those published by The Globe & Mail (Canada) and Fortune magazine (USA). Great Place to Work provides the benchmarks, framework, and expertise needed to create, sustain, and recognize outstanding workplace cultures. Visit us at www.greatplacetowork.ca or find us on Twitter at @GPTW_Canada.