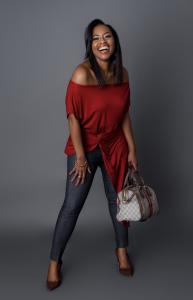 “I don’t live my life like you do, good thing it ain’t up to you, my God loves me
Just Because.””
— Tiffany Cosby

Tiffany Cosby is a Gary, Indiana native / Chicagoland-based artist who puts the “sass” into her “sanctified” messages.” Her sizzling single “Just Because” is set for global distribution on Tuesday, October 19th, 2021, by record label Soulistic 360.

Written with Janeff The Poet, “Just Because” serves a serious hook and designated a new anthem for those who desire praise, worship, and dance over tradition and routine.

Some artists play it safe, some push the envelope, but Cosby sets the standard for sensational show-womanship. Her transcending genre single, “Just Because,” is a statement song that weaves emotive aspiration into a formidable fire that listeners can step to.

Musical genres have long had a peculiar imaginative power. Here, the collapse of boundaries bounces listeners into a new lyrical culture, which is exceedingly a good thing. In our Spotify-streamed musical world, “Just Because” becomes the kind of dynamic dynamite that might live on forever.

“I don’t live my life like you do, good thing it ain’t up to you, my God loves me
Just Because.”

Since the dawning, Praise music has always emphasized a sense of community. Here, Cosby debuts a divinely favored sound. One that uplifts the spirit, reconciles the secular and sanctifies the soul through a menagerie of magical modern beats.

Cosby’s regarded as one of today’s most gifted performers who occupies a truly unique sense of space. She has established herself as a pre-eminent performer who exhibits an impressive range, and her genre-defying artistry immediately innovates while crafting a sonic soundscape that has built legions of avid listeners.

Possessing an all-embracing appreciation of a broader musical homogeneity that blends seamlessly into the soul of a song, with “Just Because,” Cosby cultivates an original 21st-century sound that fiercely protects her hybrid of poetic purity.

About Tiffany Cosby
Poised to leave her footprint in the music scene, quickly-rising artist Tiffany Cosby is the next artist to watch. Tiffany Cosby is an inspirational artist, singer, and songwriter originating from Gary, Indiana. Now based in the Chicagoland area, Tiffany began singing at a young age and developed her love for art. At the age of thirteen, she wrote her first song, and since then, she has not stopped. Through her emotion-filled vocal performances, Tiffany Cosby radiates raw emotion through ear-gracing instrumentation. Inspired by her life experiences and faith in God, she strives to push the envelope with her sound and create music to feed the soul. Moreover, the Indiana-native seeks to connect intimately through her lyricism with listeners worldwide and inspire them through humility and authenticity. Tiffany, a member of ASCAP, will have listeners engulfed in the musical world she creates with her distinctive lyricism and versatility. Tiffany Cosby is an artist to keep an eye on and ear out for as she is set to take the scene by storm and leave a lasting, positive impact on her audience.