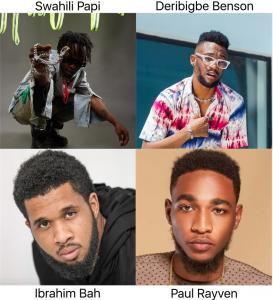 We have coined the phrases, ‘music without borders’, ‘talent without borders’ and ‘the democratization of music’ for a reason – we want to bring the world together around music…”
— Michel Zgarka, President & CEO, Hitlab Inc.

Earlier this year, Hitlab Inc. introduced the Digital Emerging Artist Showcase (DEAS) powered by its patented AI technology, the Digital Nuance Analysis (DNA) predictive software, which has the capacity to analyze, rate and rank millions of songs in a short span of time, something that not even a battery of humans could do.

Africa has become one of the fastest growing music markets in the world and Hitlab, recognizing its importance, was eager to capitalize on the endless source of talent coming from the continent. The DEAS was initially launched in four regions of Sub-Saharan Africa and immediately began generating artist interest and participation. The platform and AI software were introduced as effective new tools to help the music industry more efficiently discover, cultivate, and nurture new talent.

The DEAS began on March 17 and on June 30th during the Midem Africa forum, Hitlab presented four of the top ranked artists from phase 1 of the Showcase, representing, Kenya, Nigeria, and Guinea. These artists highlight the diversity of music styles and depth of creativity that the African continent is producing.

Meet them now in order of ranking –

1) Swahili Papi from Nairobi, Kenya an artist with a unique gift for storytelling, inspired and influenced by his African roots and world view. His is a fusion of afro-pop and hip-hop with lyrics that are raw, honest and most of all melodic. There is knowledge in every word and an edge to every beat. (@swahilipapi, https://youtu.be/ZIb3_547Q8s?t=681)

2) Deribigbe Benson (Deribb) is a singer/songwriter and producer born in Lagos, Nigeria. His artistry is felt in every song, and every lyric. His versatility is flawless and fluid, and his ability to capture his audience is unquestionable. North America’s musical influence is obvious, but so are Africa’s distinct rhythms and timing. (deribigbe.benson, https://www.youtube.com/watch?v=PWTCYt9Uzzg)

3) Ibrahim Bah (Jupiter Davibe) was born in Cotonou, Benin, but now makes his home in Guinea. He calls himself the Prince of Peul or Urban Music. The Peul, also known as Fulani or Fulbe people are scattered throughout much of West Africa, and Ibrahim would like to bring attention to the 150 million of them, by breaking down tribal and language barriers through his music, which is a mix of beats and rhythms that capture the globality of the continent. (jupiterdavibe, https://www.youtube.com/watch?v=_kIdkTmMgX8)

4) Paul Rayven is a singer/songwriter who hails from Lagos, Nigeria. For over 11-years he has been honing his craft and in 2015, was a top finalist on the music competition show, Nigerian Idol. Paul holds a degree in Economics and Statistics from the University of Benin, but his passion lay in his music. He easily crosses genres and loves the idea of not being boxed into one style but loves to explore all aspects of song creation, (@lampaulrayven, iampaulrayven, https://www.youtube.com/watch?v=d3XNIYQiF_A)

These artists will be receiving a number of important prizes: one of the four will be receiving a recording deal in North America; all four will get publishing deals; their music will be placed on rotation on Hitlab’s national radio station (KMOB on Radio.co); their videos will be featured on the Sasimi-Discovered.tv international streaming platform in the U.S., UK, France, Germany and South Korea before going worldwide, (Discovered.tv reaches over 100-million fans). As well, each of the artists will receive a pair of Wood and Gold, luxury eyewear.

Michel Zgarka, President and CEO of Hitlab said, “We have coined the phrases, ‘music without borders’, ‘talent without borders’ and ‘the democratization of music’ for a reason – we want to bring the world together around music and would like to lead the way in introducing artists from different parts of the world to a wider audience. The introduction of these four artists to a global audience is just the beginning.”

To support the artists that will be discovered through the DEAS, Hitlab has partnered with key organizations around the world that have significant audience reach and the power to expose these artists to a massive fan base. In Africa, Hitlab partnered with Boomplay, a media streaming and download service and TRACE, a first of its kind global ecosystem, leveraging afro-urban entertainment to connect and empower a new generation of creatives. Additionally, to increase the potential of connecting DEAS artist to a North American audience, Hitlab recently launched its very own primetime internet PM Drive radio show on station KMOB, accessible on Radio.co, where artists will be introduced on the PM Drive show before being added to the station’s playlist for maximum exposure. In LATAM, Hitlab has partnered with GCFlix, a free streaming service focused on indie content. Hitlab will continue to announce other important business partnerships in key regions of the world.

The organization recently announced the creation of the Hitlab Academy, an immersive experience that will help artists better understand how to navigate the industry — from how to copyright their intellectual property, negotiate and read a contract, to effectively monetizing their creativity. Artists who sign up to the Hitlab Academy will be guided through every facet of the music industry.

This is the beginning of a fantastic journey, driven by a dynamic concept that Hitlab has put in motion, to break down barriers limiting artists and audiences from discovering each other. Phase 2 artists will be announced, this coming November at Midem Digital.

About Midem
Home of the Global Music Community, Midem is the world’s leading music business event, which unites, connects, serves, and supports the global music ecosystem to exchange, create, play, forge relationships and shape the future of the industry. With a rich 4-day programme of conferences, competitions, networking events and live performances, music makers, cutting-edge technology companies, brands and talent come together to enrich the passionate relationship between people and music, transform audience engagement and form new business connections.