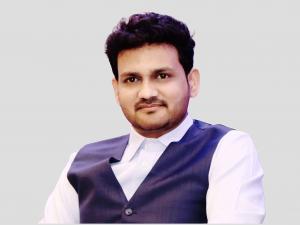 Poster for The Immortal President Film 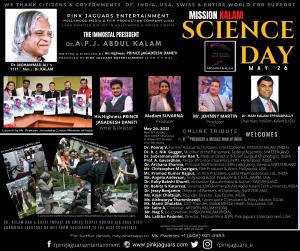 Royalty is not about richness but affluence comes with the humanitarian element that lies within.”
— His Highness Prince Jagadeesh Daneti , Royal Prince of Kalinga Dynasty

LOS ANGELES, CA, UNITED STATES, May 26, 2021 /EINPresswire.com/ — Dedication, Sincerity, Respect and Genuine emotion are clearly visible in every act of Pink Jaguars Entertainment while executing the upcoming biopic Hollywood film about the life of the Missile Scientist and 11th President of India, Dr A.P.J. ABDUL KALAM.

This inspirational bio-picture describing the life of the Missile Man and People’s President of India is titled as THE IMMORTAL PRESIDENT for Hollywood and Dr. A.P.J. ABDUL KALAM. This film is slated for Hollywood and 11 non-English languages. The film is being directed by His Highness Prince JD and produced by Pink Jaguars Entertainment, USA.

The film’s journey is underway in a novel fashion titled MISSION KALAM, a brainchild of Prince JD. These are a series of virtual global conventions through zoom, with world’s eminent personalities from various professions as well as world-renowned institutions. Prince JD’s mission is to cultivate the concept of one family and global citizenship through royalty, film as well as arts. The acclaimed representatives of governments of USA, Switzerland, UK and India assured their extended support to His Highness Prince Jagadeesh Daneti’s global vision and mission towards strengthening world economy and propagating harmony through International unity.

As a part of our upcoming biopic film, MISSION KALAM and Pink Jaguars Entertainment proudly announced and celebrated May 26th as “MISSION KALAM Science Day”. Speaking to the genesis of this event, Prince JD talked about Dr APJ Abdul Kalam’s visit to Switzerland in 2005 in the cadre of 11th President of India. Dr Kalam won the hearts of every individual he met from a goatherd to the country’s best scientists. The common public, scientists, politicians as well as press and media in Switzerland considered May 26 as SCIENCE DAY, in the honor of Dr Kalam‘s visit, where Science was a important theme.

The event was attended by leading individuals and influencers from various fields like Science, Medicine, Education, Pharmaceuticals, Finance, Hollywood Film Industry and many other sectors. Royal invitation from Kalinga Royal House by His Highness Prince JD respectfully received the attendance of Principal Staff Scientists from the CERN, the European Organization for Nuclear Research, Switzerland, is one of the world’s largest and most respected centers for scientific research. Principal Staff Scientist from CERN Laboratory, Dr. Archana Sharma and Dr. h. c. Nik Gugger, Member of Parliament from Switzerland applauded Prince JD’s global adventure of declaring and celebrating May 26th as MISSION KALAM Science Day, thus calling off the speculations and ambiguity that have been existing for this auspicious day. Participation of former Advisors as well as bonded companions of Dr. Kalam at work added emotion and quality to this wonderful virtual convention.

All the participants and key-note speakers from USA, India, UK and Switzerland paid tribute to Dr. Kalam, the great Missile Scientist. Mr. Christopher M. Corrigan, a Hollywood producer and actor partnering with Pink Jaguars Entertainment for many upcoming ventures including the biopic of Dr. Kalam, expressed his utmost happiness towards true participation and involvement of Dr. Kalam’s admirers, film and art lovers from all over the globe. He said that the genuine effort to get this biopic film acknowledged by the society involving millions of people is a first of its kind of attempt by the Director of the film, Royal Prince JD and the Managing Director, Madam Suvarna Pappu, who has been heading the responsibilities as C.E.O. Royal Affairs at Kalinga Royal House, Los Angeles, USA. Ms. Sharmilah Davi, Hollywood Writer & Director, congratulated Prince JD and Pink Jaguars Entertainment evolving Hollywood with their world class creatives that are set to create history in World Cinema. Dr. Hari Kalam Eppanapally, Chairman, MISSION KALAM (USA) and entire team are well appreciated for successful implementation of virtual conventions for the past 10 months.