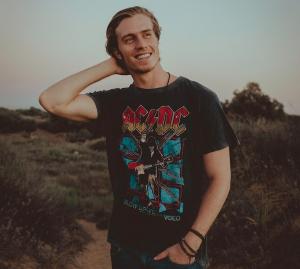 In three and a half minutes, the singer delivers a World War II story of genuine breadth and sweep — it’s simultaneously touching, exciting, and inspiring.

It’s an open secret that every actor, no matter how successful, has an electric guitar stashed under his bed. That’s as true in the studios of Tel Aviv as it is in Hollywood. Roy Niv made his name as a star in the hit Israeli television show Spell Keepers. But even as he was making the hearts of viewers race, Roy Niv’s mind was on his music. He has parlayed his popularity into a platform for his first love — earnest, well-written pop-rock, performed with passion, clarity, and complete commitment to communication. If you can fire imaginations as effortlessly as Roy Niv can, who needs to make movies?

Case in point: the thrilling “Stay Up,” Roy Niv’s latest single, and one that’s likely to bring him plenty of attention on both sides of the Atlantic. It was written during the height of the pandemic, and it’s not hard to tell. Here’s a ballad that constantly threatens to burst its restraints — one that makes the star’s longing for freedom and release present in every firm drumbeat and every soaring note that he sings.

“Stay Up” begins with softly plucked acoustic guitar and honeyed vocal harmonies; it’s all quite beautiful, but the undercurrent of restlessness and unease is apparent. Ninety seconds into the song, the drums kick in, and with them, radiant synthesizers and piano arpeggios heighten the sense of raised stakes. It all culminates in a thunderous climax worthy of a screen performer, and Roy Niv plays it to the hilt, wringing every ounce of drama out of the melody and lyric, shooting the works, announcing his arrival as an irresistible new voice with plenty of stories to tell.

Roy Niv’s commitment to romantic narrative continues in the cinematic clip for “Stay Up.” In three and a half minutes, the singer delivers a World War II story of genuine breadth and sweep — one that’s simultaneously touching, exciting, and inspiring. Roy Niv plays a young man torn between his obligations to his country and his love for his soulmate. But whether he’s on the battlefield or playing the piano in his girlfriend’s gorgeous farmhouse, he commands the camera and illuminates every frame he graces. Director Tomer Levi decorates the clip with period-specific details: uniforms (credit to stylist Shauly Waksberg), rifles, antique furniture, and fantastic costumes that bring the era alive with glorious color and style and sharpen the burning questions that the video poses. Will Roy Niv make it through the battle? Just as importantly, will his love affair survive?