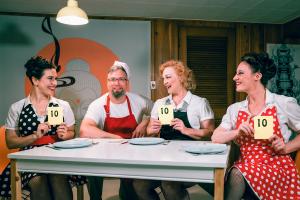 “How Do You Want ‘Em Made” is chock full of metaphor, clever turns of phrase, subtle come-ons, and endless possibilities. But it’s also a song about breakfast.

What sort of music would you expect a farmer to make? It’d be straightforward, no-nonsense, grounded in tradition but with the broad view of a wide-open field. Farmers have a well-earned reputation for laconic wisdom, so you might expect their songs to be short, witty, and straight to the point. Farmers are in touch with time, change, and the cycle of the seasons; they know about life and death. Most of all, though, they know about eggs.

It’s an egg song that Dennis J. Leise, Chicago-area farmer and internationally recognized country, folk, and rockabilly musician, is serving today. “How Do You Want ‘Em Made” is chock full of metaphor, clever turns of phrase, subtle come-ons, and endless possibilities. But it’s also a song about breakfast — one whipped up by a culinary expert who grows the food he cooks and who believes in keeping things wholesome, even when he’s cracking wise about mortality.

The new single comes on the heels of a series of remarkable releases, each of which has further deepened Leise’s character, perspective, and reputation for straight talk. “Nobody’s Coming,” which prompted a feature story in the Chicago Reader, took on religious belief in language that was simultaneously funny, touching, and excoriating. The follow-up “Hurry Up and Die” was just as frank – and like its predecessor, it drew from gospel and sacred bluegrass traditions to make some salient points about life not exactly authorized by the church. And there was nothing squeamish at all about “Dipshits,” which might be the most plainspoken, most hilarious song about cellphone addiction ever recorded.

These songs will all be included on The World That You Grew Up In Is No More, which promises to be one of the toughest-minded, tuneful, cathartic, and irresistible Americana releases of late 2021. “How Do You Want ‘Em Made” is a calling-card for the set — a statement about the fundamentally accommodating nature of Leise’s writing, no matter how blunt his lyrics can be. Rob Fitzgerald’s stylish video for the song embraces its nostalgic tone: the camera catches Leise in a letter-perfect re-creation of a 1950s American kitchen, right down to the appliances, the posters, the silverware, the color scheme, and the Spam. Apron on, Leise takes to the stove as he sings and demonstrates exactly how to prepare those eggs from his Indiana farm. Taking notes at the kitchen table are a trio of dancers from Chicago’s renowned Galaxie Girls Dance Troupe, who are sufficiently inspired to take to the wood-paneled den and strut through a high-kicking dance routine that matches the feel of the song perfectly. Do they give his cooking high scores? Well, what else would you expect a farmer to get?