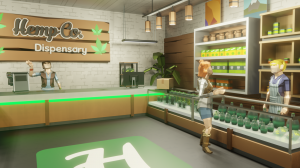 Hemp Co. – Inside a Dispensary

While there are many interactive virtual strategy games, the latest entrant, Hemp Co. – The Tycoon Game, will be loved by fans of strategy and management alike.

DENVER, COLORADO, UNITED STATES, September 1, 2021 /EINPresswire.com/ — While there are many interactive virtual strategy games, the latest entrant will be loved by fans of strategy as well as all cannabis or hemp lovers. Hemp Co. – The Tycoon Game is making its entry into the world of games, teaching the players to setup, operate and grow their very own virtual hemp dispensary.

Hemp Co. makes for a fun and engaging business simulation game, taking hemp growing into the virtual world. The game’s Kickstarter campaign will be live soon, and the game is slated to be released on Steam for PC, Mac & Linux. Here the players aim to become Hemp Kings or Hemp Queens, staring with growing hemp and then launching their own hemp dispensary. Traveling all the way from seed to farm, they can grow their hemp empire as small or big as they wish, and it all depends on their skills in sales and management. The initial part of the game involves growing, managing delivery and logistics to sell on the market. Next, the player can expand their business by opening their own dispensary and selling their own products and the surplus on the market.

“Build out your dispensary, hire staff to manage your farm and retail establishments. Process raw hemp into other products that can be sold. Expand your empire and go full steam. Create trade routes between farms, processors, retail establishments and the market – there are plenty of thrills and fun on the way”, says a spokesperson for Hemp Co.

“You can buy and sell pretty much anything on the open market. You will also learn important skills such as Importing the needed raw hemp to your processor buildings if your farm can’t keep up, or sell excess raw hemp. There is a lot out there to do”, says the spokesperson.

The team of game developers who created Hemp Co. have designed it with a very flexible system that is open for using creativity and management skills. The team members are also nature enthusiasts who hope that their game contributes positively to creating a more environment-conscious society.

Help Hemp Co. – Create Your Own Hemp Empire to get closer to its real-world launch by supporting the game on Kickstarter and wishlisting it on Steam.