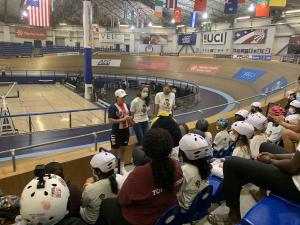 The day started with a special tour of the Velo Sports Center lead by three Olympic cyclists. 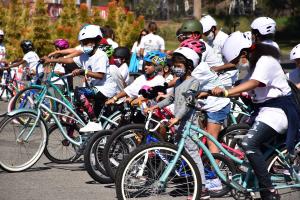 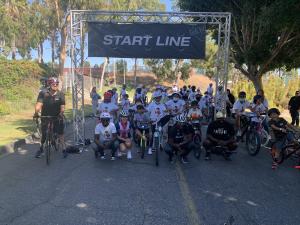 The first “Let’s Ride Bicycle Camp” was held in Southern California to teach kids from South LA how to ride safely and inspire future Olympic athletes.

As an Olympic medalist who was inspired after watching the 1984 Olympic Games in Los Angeles; I recognize the impact that elite athletes have to inspire the next generation.”
— Mari Holden, Olympic Silver Medalist

LOS ANGELES, CA, UNITED STATES, October 15, 2021 /EINPresswire.com/ — USA Cycling, in partnership with the LA Galaxy, Bahati Foundation, the East Side Riders Bicycle Club, and Streets Are For Everyone hosted its first “Let’s Ride Bicycle Camp” in Southern California. About 100 youth, ages 8-16, and their parents from South Los Angeles, worked with professional cycling coaches and Olympic athletes. The aim of the bicycle camp was to inspire the next generation of Olympic athletes ahead of the 2028 Olympic games to be held in Los Angeles. Beginning youth learned how to ride bicycles for the first time as their parents watched and memorialized the moment on their phones.

Experienced riders who already knew how to ride learned important bicycle skills like how to turn safely and, most importantly, how to stop. All the kids learned how to properly put on their helmets and other important points of riding safely like how to signal a turn with their hands.

The day’s activities included a special tour of the VELO Sports Center, a 100,000 square foot, 15 million dollar complex that is an official Olympic training facility for indoor competitive cycling. Leading the tour were three Olympic athletes from the US and New Zealand who were there to coach the kids and help inspire them. Mari Holden, a silver medalist in the 2000 Olympic Games brought her silver Olympic medal as part of the VELO Sports Center tour for all the kids (and parents) to see.

“As an Olympic medalist who was inspired after watching the 1984 Olympic Games in Los Angeles; I recognize the impact that elite athletes have to inspire the next generation. I realize that not all kids will aspire to be Olympians but we, at USA Cycling, hope to help teach them about bike safety and skills and create lifelong enthusiasts.” — Mari Holden, Silver Medalist 2000 Olympic Games, World Champion, and 6 time US Champion cyclist.

The event was free for everyone who attended and included a commemorative event t-shirt, a new bicycle helmet, event swag, as well as a free USA Cycling introductory membership. At the end of the day, the kids who showed up without a bicycle and used one of the refurbished bikes on hand were all told they could now keep their bikes and practice riding on them at home. This was met with cheers of excitement by the new young cyclists and many thanks by the parents.

USA Cycling is recognized by the United States Olympic & Paralympic Committee as the official governing body for all disciplines of competitive cycling in the United States, including BMX, cyclocross, mountain bike, road, and track. The Let’s Ride program is the grassroots effort to get more kids on bikes and introduce them to the sport of cycling. A big part of the Let’s Ride mission is to reach out to kids in underserved communities and help connect them to their local community foundations who work with kids.

This event was produced by Streets Are For Everyone (SAFE) in partnership with LA Galaxy, Herbalife Foundation, USA Cycling, VELO Sports Center, East Side Riders, and Bahati Foundation.