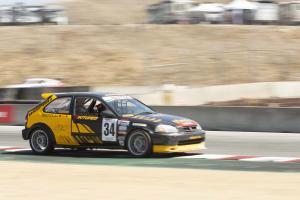 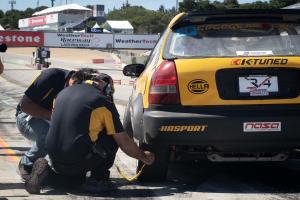 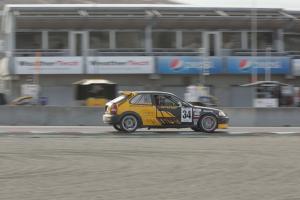 K-Tuned parts fit right from out of the box and have been proven with lots of real world testing. Hasport’s mounts and axles fit like factory parts and make the powertrain work perfectly.”
— Reza Arsham

CALIFORNIA, USA, September 28, 2021 /EINPresswire.com/ — The GoGoGear.com Racing Team unveiled their newly developed Honda Civic for Round 5 of the United States Touring Car Championship. Gone was the B18C5 from an Integra Type-R, and in was a newer generation of K24A2 from an Acura TSX. The increase of displacement from 1.8L to 2.4L results in more horsepower and torque for the lightweight Civic. The car was only out of commission for a single race while the team worked day and night to re-engineer the vehicle’s drivetrain completely. The switch to the newer power unit was made possible thanks to companies like K-Tuned, Hasport and Hondata. With time constraints meaning the team had no testing with the new drivetrain, the weekend was set to be a learning experience. Luckily, the three-day format meant plenty of time for the team and driver Reza Arsham to familiarize themselves with the new package. Early sessions were promising for the car as times were competitive, and the car responded well to the new drivetrain.

However, with any engine swap, there were teething issues. A misaligned drive belt caused the premature end to a practice session for Reza as the belt had completely shredded and disappeared. Luckily, the local parts stores had replacement belts in stock. The next challenge came from a broken Schrader valve on the shock reservoir. A highly unusual part to fail, the team had no spares on hand. Thanks to the clever thinking from competitor Viktor Czapla and the ingenuity of teammate Gary Sheehan, the team was able to make a replacement part from a borrowed metal valve stem. After a successful practice session Saturday morning, it was time to throw on the new tires for Saturday’s race and let the car loose. However, it was not to be as the car only made it a few hundred feet before Reza pulled to the side with a check engine light illuminated and the car refusing to rev past 4000 rpm. Upon inspection, the team uncovered that the crank position sensor had come unplugged and was then damaged by the drive belt. After pinning a new connection together thanks to a wiring diagram provided by Brian from Hasport, the team sent Reza out to test the car in the final practice session on Sunday morning. There, Arsham reported that the car drove fine and the fix had worked. Reza pulled the car in early and decided to save the car for the final race on Sunday afternoon. This is where having someone as knowledgeable as Brian is a huge help. The man can make you a wiring harness with the right colors from memory!

Again starting from the back half of the field, Arsham was determined to finish the race and get a good result for the team. With new dampers from JRZ Suspension, fitted on the car the team was confident that the car would be quick in the corners. Stoptech brakes made sure that the car was great under braking. But weary of the same crank angle sensor issue, Reza had a conservative start that saw him maintain position over Matthew Rivkin’s BMW 330i, who qualified alongside him. The charging Arsham could taste victory as he passed car after car. However, it wasn’t meant to be as disaster struck again. Coming through the Andretti Hairpin, Arsham went to get on the throttle after trail braking on corner entry and was met with a sinking feeling in his stomach, no response from the car. After trying to find another gear to propel him forward, the check engine light was illuminated, and the car would not rev higher than 4000 rpm. Reza was forced to pull the car aside and, after a moment of frustration, radioed to his team, “Car 34: Check engine light. No rev. That’s it. Game over.”

The bitter feeling of having a certain win taken from you isn’t easily forgotten, but the potential of having a car that can challenge for victories can make up for it. “Other than what can only be described as minor issues with the crank angle sensor and drive belt, the car drove extremely well and has shown a lot of promise.” After the race, a disappointed Reza said, “The pace that we have shown today can be attributed to our partners K-Tuned, Hasport and Hondata. Without them, the car would not be here today competing for victories.” K-Tuned parts fit right from out of the box and have been proven with lots of real world testing. In addition, K-Tuned’s awesome customer support was always there for us when we could not figure something out. Hasport’s mounts and axles fit like factory parts and make the powertrain work perfectly and their years of experience made this such an easy ordeal.

Reza and the GoGoGear.com Racing Team now turn their attention to the track where Arsham won his maiden victory at the 2020 season opener, Buttonwillow Raceway, for the penultimate round of the 2021 Championship.