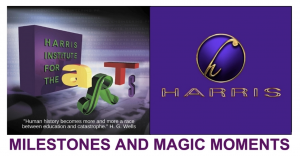 TORONTO, ON, CANADA, September 3, 2021 /EINPresswire.com/ — In 1989 Harris Institute opened in a 1,800 sq.ft. building at 296 King Street East in Toronto. In 1994 it relocated to a 15,000 sq.ft. industrial building designed in 1908 by Massey Hall’s architect George M. Miller at 118 Sherbourne Street. Since 1989 international students have come from 142 countries. The college has delivered innovative educational programs with partners including University of the West of Scotland, Moscow International Film School, Edinburgh Napier University, the International Fund for Ireland and Nashville’s ProMedia Training Centre.

For a 7th consecutive year Harris Institute ranked ‘best school of it’s kind’ in the 2020 ‘Media Arts Education Report’. It was the only school in Billboard’s ‘Top 11 Schools’ from outside of the United States. In 2004 the first Harris grads earned degrees at the University of the West of Scotland with tuition waivers. Since then over 220 Harris and UWS students have benefited from the unique partnership.

The college has the highest percentage of award winning faculty of any school with over 50% having won awards for what they teach. The faculty working together for a common goal was the inspiration for the proposal to create Metronome, the world’s first ‘music city’ on Toronto’s waterfront.

In 2015 Harris Institute became the first school to introduce a comprehensive policy ensuring ‘free speech and the open exchange of ideas’. It is the only post secondary school in North America to have achieved five 0% Student Loan Default Rates and a 90.91% ‘Employment Rate in The Field of Study’.

Students in the Arts Management Program have operated Confidential Records since 1997. It has donated the proceeds from over 100 album releases and showcase events to nine charities and non-profits. Harris alumni have won over 450 music, film and television awards. In 2018, Harris Institute’s founder was awarded the Cashbox Canada Legacy Award for ‘Lifetime Contributions to the Canadian Music Industry’.