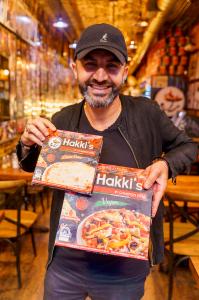 99 WASHINGTON AVENUE, SUITE 1008, ALBANY, NEW YORK, UNITED STATES, October 11, 2021 /EINPresswire.com/ — Hakki’s founder and CEO, is one of the most renowned pizza chefs, is making big moves now to help the homeless. Hakki Akdeniz, is making the next big steps toward a better future. This project, just like his pizzeria businesses in New York, was born with Hakki’s spirit of giving back to the less fortunate, of them whom he once was. Before his success in the pizza business, Hakki Akdeniz was one homeless himself. For this reason, he ensures that a portion of the sales goes to charity in order to end homelessness in the US. His dream is that other homeless people, like he one was, are able to dream big and get out of the situation that they are in. Hakki Akdeniz was born in Turkey in 1980. He was always an active and helpful child, working in a local bakery to help bring money home to his family. This bakery is where he learned how to make dough. This bakery is where he learned how to make dough. Hakki Akdeniz’s family had very little. Being the success he is now makes him appreciate every bit of what he has. Coming from humble beginnings, https://www.instagram.com/p/CK9Rdq6lCxN/?igshid=1p7pic7pg0ymr

Hakki Akdeniz would learn the skills necessary to eventually jump into the pizza business. Hakki decided to leave Turkey and moved to Canada in 1997. He lived there for four years then moved to New York City in 2001. Upon his arrival in NYC, he got a job at a local pizzeria in town. Coming to USA from his poverty background in Turkey was no easy task. He had to endure many difficulties and even had to sleep in the very pizzeria he worked in to survive. In 2009, he left that store and founded his own pizza shop located in Manhattan. It was called Hakki Pizza until it was eventually renamed Champion Pizza. Hakki has since garnered over 12 million followers on Instagram.

His generosity has even been recognized by the New York State Assembly as well as the Office of the Manhattan Borough, whose president underlined his “commitment to improve the city and vibrantly enriching the community.” In 2019, he was the recipient of the Beacon Award among a total of 12 awards, one given by the Mayor of New York City, one given by the United States Senator, and two given by the New York Governor, namely the “Person of the Year” award and the “Man of the Year” award given for his success as an entrepreneur who has given back to those in need. Even recently, Forbes also cited Akdeniz as being one of the most inspiring immigration stories. In addition to his popular pizza shops, which are known to have been visited by a number of famous Hollywood celebrities, Akdeniz is also revered for his charitable efforts in both feeding and supporting New York’s homeless community and for giving aid to those in need, such as when he helped provide two trucks of supplies to Puerto Rico in 2017 after Hurricane Maria hit. During Hurricane Sandy, Hakki opened his heart and business to provide the community with free pizzas and drinks over the span of a few days

Now, Hakki Akdeniz has his eye on expanding he’s frozen pizza brand http://hakkispizza.com/ to more markets and stores. He just recently did a huge charity event where he gave out tons of his frozen pizza packages to the homeless at homeless shelters, such as Bowery Mission. Hakki Akdeniz has had his spotlight in media in the past years. He has been featured on television, podcasts, newspapers, and even collabs with popular influencers. A documentary film on his story is in the works as well. By many, Hakki is considered the physical epitome of the American Dream. He has become one of the most well-known philanthropists and restaurateurs in New York City. Starting from zero to where he now, Hakki Akdeniz has amassed quite the success. His path to get where he is today was nothing short of inspiring, let alone easy. To be put in the position that many of the homeless are in today, it leaves many with hopelessness. The feeling of being helped by someone like Hakki Akdeniz sparks the fire for hope and opportunity in these people who are currently in times of dire need. During these hard times especially, there arises a need for more men like Hakki Akdeniz. He gives us hope during these troubling times with his charitable acts. A champion of gold heart, https://www.instagram.com/p/CHudcMtFioW/?igshid=ypokzjvpw52t
Hakki Akdeniz uses pizza and compassion to help the homeless and serves as an inspiration to others to do the same. At the very least, this man needs his story transcribed in history. Hakki Akdeniz has far exceeded the bar of expectations for film and literature to be made about him, so that such stories could inspire others. One day, we may even see this Gentlemen become the next Nobel prize winner, as well deserved feat. The last word he said. The last word BE THE REASON SOMEONE SMILES TODAY.