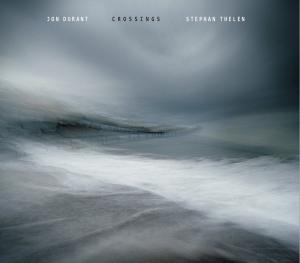 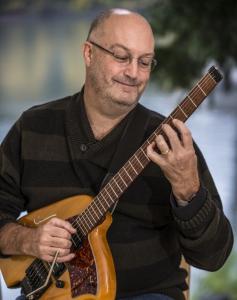 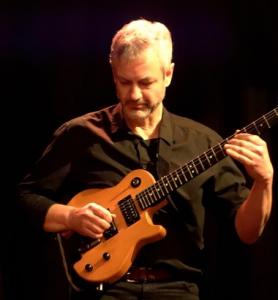 ASHEVILLE, NC, USA, May 27, 2021 /EINPresswire.com/ — Swiss guitarist Stephan Thelen and his American counterpart Jon Durant have teamed up for an international musical conversation. The pair conceived and executed the album “Crossings” during the Covid lockdowns of 2020. Each working in his own home studio, Thelen on Lake Zürich, Durant on the Willamette River, the pair fell into a remarkable sense of shared purpose as they developed the seven tracks that comprise the album. While the album was entirely done with guitars (and one bass part), there are frequent trips into sonic spheres that bear little resemblance to the traditional sounds of the instrument they share.

Following on from Durant’s work on Thelen’s “Fractal Guitar 2,” the pair began the work as a project for a sampler project that MoonJune Records were to release. Those plans were scrapped but the two had so enjoyed the process that they began to explore more pieces together. Thelen noted: “In April 2020, during the lockdown, I immediately thought of doing a duo with Jon. I decided to revisit the title track from my 2004 solo album, ‘Vol de Nuit’, which we recorded as a homage to two of our favorite guitarists, Robert Fripp and Terje Rypdal.”

The album contains a series of musical dialogues, often begun with Thelen’s polymetric guitar loops, which allowed Durant a wide range of options for textural and lead work, notably his expressive fretless and colorful electric 12 string playing on the title track, “Crossings.” The sublime “Sunrise” features Durant’s cloud guitar drifting above Thelen’s hypnotic minimalist patterns before the deeply emotional lift of fretless lead towards the end. The darker hued “Dream Sequence” and “Infinity” showcase the two guitarists’ textural soundscaping, with the former offering a nod towards innovative trumpeter/composer Jon Hassell.

Durant commented, “Working with Stephan offers me a chance to explore in ways I wouldn’t necessarily do on my own, and it challenges me to step up my game and let my playing be more extroverted.” Thelen added, “We did a lot of file sharing, and I was very pleased at incredibly good, fast, and reliable working with Jon was.”

Innovative guitarist Jon Durant brings a unique sense of texture and melody to his instrument. His distinctive “cloud guitar” soundscapes and engaging lead work have graced numerous CD recordings and film soundtracks and his very distinctive use of fretless guitar has been widely admired.

Durant has previously released 10 solo albums and three Burnt Belief records (with Colin Edwin of Porcupine Tree). Durant has also been featured on the Astarta / Edwin album which was released in 2016. Durant, Colin Edwin and Ukranian singer Inna Kovtun released a CD in 2019 which featured a completely unique and modern take on traditional Ukranian folk music, with a blend of progressive rock, ambient, and pop elements.

Durant’s acclaimed 2018 solo release “Parting Is” was his first ‘solo guitar’ recording and the follow up solo guitar album “Alternate Landscapes” continued to stretch the boundaries of what a guitar record can sound like. Both solo CDs have been nominated for “Best Ambient Album” in US new age radio publications, while “Alternate Landscapes” also spent multiple weeks at the top of the NACC Chill Charts. In 2020, Durant released the well received duo album “Across the Evening” with Estonian guitarist Robert Jürjendal as well as his most recent solo album, “Soul of a River” (Myndstream Records) which featured Jon playing guitars and piano. In addition, Durant released a pair of recordings with keyboardist and Brian Eno collaborator Peter Chilvers, “Always Golden Sands” and “Vista” at the end of 2020 and start of 2021.

Stephan Thelen was born in Santa Rosa, California, where he spent his first ten years. He then moved with his family to Switzerland, where he still lives. After studying mathematics and music at the University of Zürich, he attended several Guitar Craft courses under the direction of King Crimson guitarist Robert Fripp, closely studied the music of Béla Bartók and Steve Reich, and eventually concentrated on studying polymetrical music.

As a guitarist and composer, he has worked and recorded with many internationally acclaimed musicians including Bill Laswell, Henry Kaiser, David Torn, Markus Reuter, Eivind Aarset, Hans Koch and Irene Schweizer. He has composed music for many ensembles, most notably the Kronos Quartet, from which he received a commission in 2016 to compose a piece for their “50 for the Future” program: https://www.50ftf.kronosquartet.org/composers/stephan-thelen

He is founder, guitarist and main composer for SONAR, an internationally acclaimed Swiss quartet, that specializes in minimalistic and polymetrical rock music that uses a unique tuning called the tritone tuning. SONAR has recorded five studio albums, the latest two (“Vortex” and “Tranceportation” with David Torn on RareNoiseRecords). He has recently released “World Dialogue,” an album of string quartets on RareNoiseRecords, and “Fractal Guitar 2” on Moonjune Records.