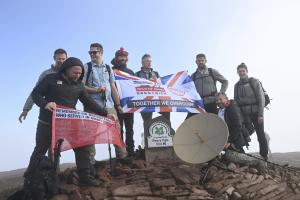 Military charity, WWTW’s, The Grenadier Walk of Oman, of which The Duke of Sussex is the Expedition Patron –will be arriving in central London on Oct 21st.

LONDON , LONDON , UNITED KINGDOM, October 15, 2021 /EINPresswire.com/ — Leading military charity Walking With The Wounded’s (‘WWTW’) 6th expedition, The Grenadier Walk of Oman, of which The Duke of Sussex is the Expedition Patron –will be walking from the source of the River Thames and along the historic Thames Path, arriving in central London on October 21st.

On Monday, October 19th, the team will walk through Windsor and Eton, before stopping for the night. On October 20th, they will start at Teddington Lock, the path will take them past Kew Palace, Putney Bridge and Westminster Bridge and on the final day, October 21st, the team will complete the last stretch of the Grenadier Walk of Oman, starting at the Royal Hospital Chelsea and finishing at the Anglo Omani Society on Sackville Street.

The team were due to cross the Omani desert, however, due to the global pandemic, they are now going to cross the UK, walking the equivalent distance of 10 marathons in 12 days, to raise funds and awareness for Walking With The Wounded’s employment, mental health, care coordination and volunteering programmes supporting veterans and their families to get back on their feet and contribute in their communities once more.

The expedition started on Pen-Y-Fan in Wales, the 6-man team then walked through Hereford and Gloucestershire before arriving at the start of the infamous Thames path- a long-distance walking trail that follows the river Thames from its source in the Cotswolds before arriving in the heart of London. The Grenadier Walk of Oman will finish at the Anglo Omani Society in London. The team will be supported by a Grenadier vehicle for parts of the route.

Due to various physical injuries, some team members will only be able to walk part of the route – overcoming their individual situations to achieve what they can.

WWTW’s CEO, Fergus Williams, said: “Although the expedition is now taking place in the UK, the team are walking up to 400km, which is no easy feat. We are looking forward to supporting them as they put their hard work to the test and walk to demonstrate that those who serve or served can overcome adversity.”

Prince Harry, The Duke of Sussex, said, “The team at Walking With The Wounded understand that it’s not about where you walk — it’s about walking together with a common purpose and shared mission. These men and women know what service is, they’ve seen and overcome adversity, and they won’t let obstacles get in their way. They are paragons of inspiration for communities everywhere. We wish them good luck and good weather.”
-Ends-

The Grenadier Walk of Oman officially began yesterday as the team climbed Pen-Y-Fan in the #BreconBeacons, an infamous #SAS training peak. .