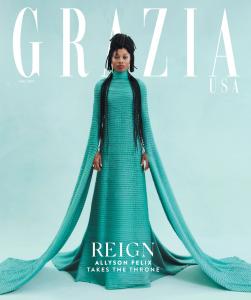 “We’re extremely proud to present a portrait of Allyson Felix at the top of her game on the cover of our first-ever print issue” says Grazia USA Editor-in-Chief David Thielebeule. “Felix is a superwoman. Not only has she achieved the American Dream; but also, she is a visionary and inspiration to women around the world. Her professional and personal pursuits are equally representative of success, inclusivity, optimism and joy—everything our brand stands for.”

Inside Grazia USA’s first print issue, Felix shares an intimate look at her life and career like never before. The activist, mom and now, shoe designer, stuns in a 10-page editorial feature and interview documenting her earliest running memories, the pressure women face to balance career and family, launching her new brand Saysh, and her hopes for the next generation.

Felix reveals how her path to track dominance was set from an early age. “In P.E., the boys and girls would run together,” she continues. “It was just always so much fun to think, ‘I’m beating the boys.’”

That early seed blossomed after watching Dominique Dawes win gymnastics gold at the 1996 Olympics: “I just thought, Wow, here’s a young girl who looks like me and she’s amazing and phenomenal and doing something really cool.”

Today, as Felix ends her Olympic career on top with 11 total medal wins, Grazia USA learns the activist, mom, and founder and face of her own brand is just getting started.

Felix won her Tokyo medals wearing shoes from her new line Sasyh, an active lifestyle brand inspired by the misrepresentation and oversight of women in sport. “We’ve been wearing men’s shoes,” she tells Grazia USA exclusively, outlining the ways in which Saysh was developed to break the mold, literally.

As she embarks on her latest, entrepreneurial pursuit as a female founder of color in America, Felix closes out her Grazia USA cover interview on her hopes for the next generation. “I want women to feel like they can make their decisions based on their own desires,” she says. “When I was growing up, I never really saw examples—prominent examples—in my sport of women who did both. I would love for that narrative to be changed.”

The full interview with Allyson Felix will be published in the debut issue of Grazia USA, available nationwide from September 23, 2021.

Felix’s cover issue will sit on newsstands alongside two additional cover stars: South Sudanese-British model and designer, Alek Wek, and Canadian singer-songwriter and actress, Jordan Alexander, an activist who fights for LGBTQ+ rights as well as people of color. Each powerhouse female representative of their own generational fashion, culture, and influence in America.