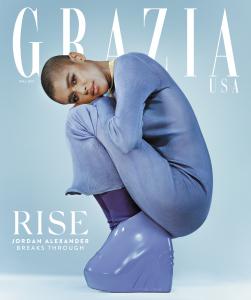 Grazia adopts an innovative digital-first business model providing a strong new brand identity for consumers. Content is distributed across a global multi-channel network with a focus on digital, video, and social, complemented by quarterly print editions

“Jordan is modern-day beauty and style, personified,” says Grazia USA Editor-in-Chief David Thielebeule. “Our inaugural print issue is a celebration of fashion, stardom, and inspiration through the ages, and Jordan Alexander is the perfect representation of what it means to be a star today. She is a muse and a role model to so many, and we’re excited to share her coming of age story.”

Fresh off her Met Gala debut, newly minted It Girl Alexander speaks exclusively with Grazia USA on adjusting to her new-found fame, being a role model for the LGBTQIA community, and manifesting her new life.

The 28-year-old star has had quite a year, she tells Grazia USA: “This period of time, in terms of change, can account for maybe five years of change [compared to] what I was used to previously, when things were changing at a very slow rate.”

After taking some time off from acting to focus on music in her mid-20s, landing a leading role in HBO Max’s Gossip Girl has taken Alexander from relative obscurity to rising starlet seemingly overnight. She jokes to Grazia USA about being recognized on the streets of New York City: “They’re like, ‘Are you…’ And I’m like, ‘Possibly? It depends on what you’re talking about. Did we meet in real life or is it something I did?’”

Alexander identifies as queer and she shares exclusively with Grazia USA her initial shock at being told consistently to “keep her private life private” when starting out in the industry, for the sake of her career. Fearless in the face of adversity, hiding her sexuality isn’t something the rising star ever considered. In fact, she bristles thinking about it. “What the hell? What the hell! I think people just don’t understand how steeped in heterosexuality our society is, when people are like ‘Keep your private life private.’ I’m like, ‘Straight people don’t.’”

The bold, outspoken Alexander is on the cusp of fame. With the final six episodes of Gossip Girl Season 1 set to debut in November, the series was recently renewed for a second season, and there are bound to be many more opportunities ahead for her to shine. It goes without saying that this is a pivotal time for the young actress, and an incredible moment to get to know her.

The full interview with Jordan Alexander will be published in the debut issue of Grazia USA, available nationwide from September 23, 2021.

Alexander’s cover issue will sit on newsstands alongside two additional cover stars: South Sudanese-British model and designer, Alek Wek, and America’s most decorated Olympic track athlete ever, Allyson Felix. Each powerhouse female representative of their own generational fashion, culture, and influence in America.

ABOUT GRAZIA:
Grazia is Italy’s fashion bible, published by the Mondadori Group. For 80 years Grazia has remained in step with changing tastes season after season, style after style. At the top end of quality and design, Grazia is the most accomplished ambassador of the “Made in Italy” brand and is a preferred advertising vehicle for designer, fashion, and beauty companies. Thanks to its experience, excellence, and brand value, Grazia is the first Italian weekly magazine to extend its successful formula abroad with 21 editions worldwide in 23 countries, creating the most dynamic magazine network on the market and the global platform graziamagazine.com.