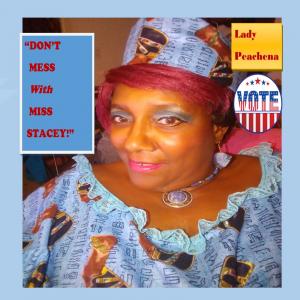 Lady Peachena has been gifted with a unique ability to write songs about celebrities like “OPRAH, QUEEN OF TALK TV” about Oprah Winfrey, “I WANNA PLAY LIKE SERENA!” about tennis great, Serena Williams, “LORD, PLEASE GUIDE OUR PRESIDENT,” remixed for the presidency of President Obama, and “RUN, HILLARY, RUN,” about Hillary Clinton. Surely, she hopes that “DON’T MESS WITH MISS STACEY” will become the theme song for Ms. Abrams & the Democratic Party.

In October 1995, Lady Peachena founded the famed Late Show’s Gospel Choir for CBS TV’s “LATE SHOW WITH DAVID LETTERMAN,” and they sang on “THE LATE SHOW” for 10 years straight (1995-2005). This awesome choir has sung on several other TV shows like “MTV UNPLUGGED,” “INSIDE EDITION,” & “IMPRACTICAL JOKERS.” In 2010, Lady Peachena was the only female Gospel singer to ever direct her choir and lead them singing her smash-hit song, “DANCING IN THE SPIRIT” on Showtime’s “THE BIG C.” In 2013, she sang in a cameo role on Spike Lee’s movie, “DA SWEET BLOOD OF JESUS.” Lady Peachena & The Great Divas of Gospel, starred as singing angels in the new film short, “MR. PARKER,” produced by Alex Ashe at BAM’S Cinema-Film-Fest 2019. The LSG Choir sang a powerful tribute to Gospel’s Queen, Shirley Caesar, at the Beacon Theater in the “Grammy Salute to Music Legends 2017,” that aired on PBS TV’S “GREAT PERFORMANCES” in Oct. 2017. They were also featured in a spectacular concert with 13 singers from Sweden at the Apollo Theater; in a docuseries called “EN KVALL I NEW YORK” that aired in Sweden on SVT-TV in 2016. Lady Peachena is also the playwright of the long-running off Off-Broadway musical, “The Great Divas of Gospel,” which gives a powerful tribute to the female pioneers of Gospel music: The Clara Ward Singers, The Famous Caravans, Sister Rosetta Tharpe, Mahalia Jackson, and others.

Lady Peachena’s new single, “DON’T MESS WITH MISS STACEY!” will be released on all digital music outlets on June 18, 2021, and a snippet of it is now at: https://ladypeachena.hearnow.com/dont-mess-with-miss-stacey. Her 3 solo inspirational albums are at: www.Amazon.com. For bookings, email Lady P. at: peachena@aol.com. Her website’s at: www.ladypeachena.com. The LSG Choir’s website’s at: http://www.LateShowsGospelChoir.com. Tune in to her online radio station 24/7 at: https://streaming.live365.com/a58535