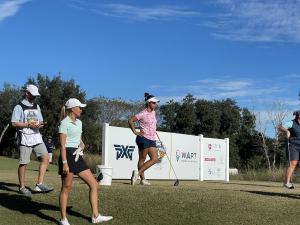 Jessica Porvasnick and Sophia Garcia get ready to tee it up at PXG Women’s Match Play Championship gets ready tee off at the Slammer & Squire golf course at World Golf Village. The tournament launched a new match play format today, giving excitement to e

We developed a format that allows for match play but doesn’t necessarily end the match after 5 holes . This is competitive and valuable for the players, and fun to watch for the fans.”
— Mark Berman

ST AUGUSTINE, FL, USA, November 2, 2021 /EINPresswire.com/ — History was made today as the inaugural PXG Women’s Match Play Championship rolled out its “Point Play Pod” format today for the first round of the match play session. Play concluded as the sun set on the 27 hole marathon and day one included upsets, surprise leaders, and major comebacks. The points-based match play format has never been used in professional golf, and the action was non-stop. With a point on the line for every hole, each shot was crucial throughout the day.

In this new format, the 64 players, seeded in this case from last week’s 54-hole stroke play tournament, are separated into 16 “pods” of four players. They play nine hole matches against each other twice in a round robin format. Players contest all nine holes in each head to head match. There are 10 possible points in each match, which can be won, lost, or halved. The winner of each match also receives one bonus point. With three 27 matches today and tomorrow, there are 60 total points available (30 each day). The player with the most points in her Pod advances to the Knock Out Rounds. The traditional Sweet 16 and Quarter Finals begin on Wednesday, 11/3 at 8:00 AM. The semifinals and finals will be held on November 4 beginning at 8:00 AM.

In Pod G, Katie Hollern (Sedalia, CO) had one of the highest point totals of any Pod on day one. The 20.5 points out of a possible 30, were tied for the most of the day. Almost half of the points came in the first match of the day, with a 8-2 victory. Even with the 20.5 points, and yet Hollern only holds a 3-point lead over Jordy LaBarbera (Allen, TX) heading into the last 27 holes of play.

In Pod E, Emily Penttila (Finland) showed why all 27 holes are critical Penttila started her day with a 6.5-3.5 loss to Texan Maddie Luitweiler, but then dominated the next 9 holes against Washington’s Sara Rhee, which included 6 birdies, and a 7.5-2.5 victory. The 5 points victory was one of the largest of the day and was followed by a 7-3 victory. The dominant 18 holes puts Penttila at the top of her Pod with 27 holes more to play tomorrow. Despite that performance in those two matches, she holds only a 2-point lead over Luitweiler.

Alice Duan (Reno, Nevada) put on one of, if not, the best performances of the day and leads Pod D by 3.5 points. Duan started her day in a pod of three (one of only three pods of three in the field and due to injury withdrawals . Out of the total 20 points Duan could win, she walked away with 14. Duan played 18 holes, and only lost a full point on three of them. Duan ended up making 6 birdies and an eagle on the day. The total strokes under par (-8) for Duan was more than her two playing competitors combined (-7), a 65 if it were a stroke play event.

Locally, Ponte Vedra’s own Catherine O’Donnell leads Pod D by 1.5 points over Newport Beach, CA native Kaley In with 18.5. O’Donnell was a star at Nease High School and went on to be an All American at UNC Chapel Hill. Jacksonville’s Aneta Abrahamova, originally from Slovakia trails Philippines’ Rianne Malixi 18-15.5, but rallied with a 6.5-4.5 win in her final match of the session.

Said Mark Berman, producer of the PXGWMPC and creator of the Pod Play Format, “We wanted a format that allowed for match play but didn’t end the match after 5 holes and you weren’t out of the hunt on the first day based on a won-lost record. We wanted it to be competitive and valuable for the players, and fun to watch for the fans. He continued, “Watching a match end on the 14th hole is no fun, and a long walk back to the clubhouse. And with 10 points available per match, even if you are out of first place by 4 or 5 points going into match six, you still have a very viable chance to advance. So, everyone is in it longer.”

Berman also noted that like any developmental women’s tournament, the players are paying their own entry fees, travel fees, etc., so making sure they got their money’s worth was a huge consideration. “Not advancing and going home after the round of 64 is not fun nor a valuable learning experience nor a good financial value. These women played 27 holes today and were grinning when they came off the golf course because every one of them are still in the hunt.”

The match play tournament will continue at Slammer and Squire tomorrow (11/2) at 8:00 AM for day two and 27 more holes of match play to decide the final 16. The PXG Women’s Match Play Championship is free to the public and we would love to see you for the final round. Find the free tickets at https://womensmatchplaychampionship.com

For full Pod scoring visit https://wapt.bluegolf.com/bluegolf/wapt21/event/wapt2113/contest/529/leaderboard.htm You’ll find each pod on a drop-down menu under the WAPT logo, reading “POD A Standings.”

The PXG Women’s Match Play Championship is a unique 10-day tournament featuring a stroke play tournament, seeding a match play event, both being held at World Golf Village. The PXGWMPC is a women’s initiatives collaboration with Generation W and featuring the Generation W Links to Leadership Summit presented by Circle K, which is being held between the two golf events on October 29 at the St. Johns County Convention Center. The PXGWMPC hosted its official pro-am on Monday, October 25 and raised more than $50,000 for Investing in Kids (INK!), IN addition to Title Sponsor PXG, the four Founding Partners include Murgado Automotive Bentley & Maserati of Jacksonville, Baptist Health, SQAIRZ Golf Shoes and On Point Ball Markers.