Global Surgical Robot Market is Forecast to Reach $15bn by 2028 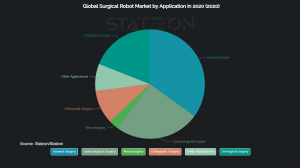 LAHTI, FINLAND, March 16, 2021 /EINPresswire.com/ — The global surgical robots market size was valued at around 5.4 billion USD in 2020 and is anticipated to grow at a CAGR of +13.8% over the forecast period. The robotic surgery market is forecast to reach 15 billion USD in 2028.

Key market trends and drivers attributing to growth include:

The North American region was valued at 3.1 billion USD in 2020. The United States has influenced the market share growth in the North American region in several ways. For instance, the country is a pioneer adopter of robotic surgery and home to some of the largest surgical robot companies in the market. Additionally, active participation of academia and collaborations were done with corporates have also influenced the growth of the region’s market.

Moreover, the Asia-Pacific market is estimated to grow significantly. The region was worth around 918 million USD in 2020 and is forecast to grow significantly during the forecast period. The rapid growth there is linked to rising demand from key markets, such as China and Japan, the increasing patient pool in India, governments that have begun to cater advanced healthcare services, and R&D done in collaboration with governments and universities.

Surgical robotics types
Based on the type of surgical robotics; surgical instruments & accessories hold the largest share (49%) of the market. They were valued at around 2.6 billion USD in 2020. Robotic systems take up 33% of the market, which is followed by services (18% of share). Surgical instruments & accessories are disposable by their nature and utilized extensively in surgical operations. These factors largely drive the growth in this segment, and thus they are expected to hold a firm market dominance.

General surgery comprises a broad range of surgery, such as gastrointestinal tract, trauma to the abdomen and thorax, and skin and breast conditions. The large share and high growth of this segment can be attributed to factors, such as modern robotic instruments enabling improved minimally invasive surgery (MIS), and better visual capacity given by 3D monitors.

The gynecologic market segment is currently valued at 1.4 billion USD. A variety of conditions, including cancer, fibroids, and endometriosis can affect the female reproductive system. The most common types of gynecologic cancers are cervical, endometrial (uterine), and ovarian cancer. Women with these and other conditions can be treated with a robot-assisted hysterectomy (the surgical removal of the uterus). It is the second-most common surgical procedure for reproductive-aged women in the United States, and approximately one-third of all U.S. women will have a hysterectomy by the age of 60.

The urological application in robotic surgery is valued at around 1 billion USD. Robotic urological surgery can be used to treat several diseases and conditions, including prostate cancer, kidney cancer, kidney obstruction as well as kidney, ureter, and bladder reconstruction. A robotic prostatectomy operation, for instance, allows a surgeon to safely remove a cancerous prostate while avoiding nerves and muscles surrounding it. The benefits to patients include experiencing significantly less pain and blood loss, and quicker recovery times. The robot-assisted prostatectomy, for example, requires 2-3 weeks to recover, meanwhile traditional “open surgery” recovery time may last for two months.

Surgical robotics end-users
Based on end-users, the robotic surgery market is fragmented into hospitals and ambulatory surgical centers. Hospitals dominate the end-user segment with 86% of the market share, which is worth around 4.6 billion USD. Hospitals as end-users have major advantages, such as working conditions that allow improved focus and higher operational accuracy, as well as increased adoption of surgical robots. This leaves the ambulatory surgical centers with a 14% share of the market.

Why The Treasure Coast Real Estate Market Is Surging In 2021

What Makes a Home Sellable in the Covid Marketplace? Travis Patrick White Examines These Factors