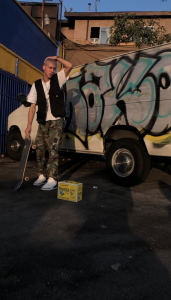 GianniP is making huge waves as an up-and-coming artist.

SANTA CLARITA, CA, USA, May 26, 2021 /EINPresswire.com/ — 21-year-old music artist GianniP, aka Gabriel Prieto of Santa Clarita Valley, is making huge waves out of the mid-sized town! Representing the hidden valley of Santa Clarita. Gianni P calls SCV his home and is representing it well through his uniquely crafted and perfectly executed tracks.

Gianni recently released an EP called Playboy Wasteland, and as a part of the collective Alias in Question, was featured on the song Codeine Literacy alongside the musical wizard Zoe Rex. While known locally, it wasn’t until GianniP started releasing music publicly that people started to really recognize his unique sound and artistic presence.

GianniP has been working on and writing numerous songs and planning a lot of future projects. He is slated to release a few singles in the upcoming month of June. As well as being a music artist on the rise from Santa Clarita, GianniP also hopes to be recognized as a positive force in his community and a dedicated one. GianniP as well as Alias in Question will be releasing more music very soon!