Gene therapies market is projected to reach USD 14.6 billion in 2030, growing at a CAGR of 30%, claims Roots Analysis 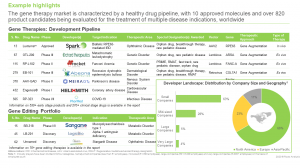 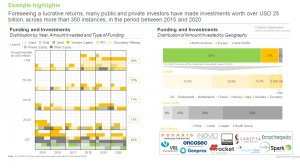 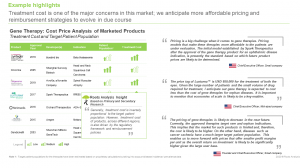 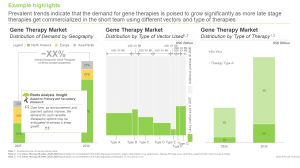 Driven by the potential treat the root cause of diseases, the gene therapies pipeline is growing, and the market anticipated to witness substantial growth

Success of approved gene therapies has resulted in a surge in interest of biopharmaceutical developers in this rapidly evolving domain. Presently, the ability of gene therapies to treat diverse disease indications is considered among the most prominent drivers of this market. In addition, promising clinical results of pipeline candidates are anticipated to draw in more investments to support product development initiatives.

To order this 720+ page report, which features 220+ figures and 375+ tables, please visit https://www.rootsanalysis.com/reports/view_document/gene-therapies-market/268.html

Around 800 gene therapies are currently being developed across different stages
Apart from 10 approved products, most of the aforementioned therapies (65%) are in the early stages of development (discovery / preclinical), while the rest are being evaluated in clinical trials. It is worth mentioning that more than 40% of clinical stage candidates are intended for the treatment of oncological disorders.

Over 65% of innovator companies focused on gene therapy development, are based in North America
Interestingly, more than 75 players based in the same region, are start-ups, while over 35 are mid-sized players, and 10 are large and very large firms. Since the majority of gene therapy developers are headquartered in the US, it is considered a key R&D hub for such advanced therapy medicinal products.

There are 400+ registered gene therapy focused clinical trials, worldwide
Clinical research activity, in terms of number of trials registered, is reported to have increased at a CAGR of 12% during the period 2015-2020. Of the total number of trials, close to 25% have already been completed, and 35% claim to be actively recruiting.

USD 25.4 billion has been invested by both private and public investors, since 2015
So far, a significant proportion of the capital raised has been through secondary offerings (USD 12.9 billion). On the other hand, around USD 5 billion was invested by venture capital investors, representing 20% of the total amount.

Close to 20,000 patents have been filed / published related to gene therapies, since 2016
Around 30% of the total number of applications were related to gene editing-based therapies, while the remaining were associated with gene therapies. Further, majority of the patent assignees were industry players, however, the contribution of non-industry players in the overall patent filing activity has increased considerably (CAGR of 16%), over the past few years.

There have been several mergers and acquisitions in this market during the period 2015-2019
In fact, M&A activity is reported to have increased at a CAGR of more than 40%. Key drivers of the acquisitions mentioned in the report include, therapeutic area expansion, access to a novel technology / platform, drug class consolidation and drug class expansion.

North America and Europe are anticipated to capture over 90% of the market share, in terms of sales revenues, in 2030
In vivo gene therapies currently represent a significant share of the market, and this trend is unlikely to change in the foreseen future, as several such candidates are being evaluated in late stages. In addition, more than 130,000+ patients are projected to use gene therapies in 2030 and the demand for gene therapies is expected to grow at an annualized rate of 29% and 31% during the periods 2020-2025 and 2025-2030, respectively.

To request a sample copy / brochure of this report, please visit https://www.rootsanalysis.com/reports/view_document/gene-therapies-market/268.html

The report features inputs from eminent industry stakeholders, according to whom, gene therapies exhibit the potential to become a promising alternative for the treatment of genetic disorders. The report includes detailed transcripts of discussions held with the following experts: