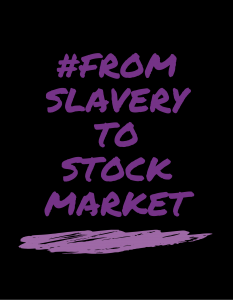 This movement highlights the incredible Black American economic journey from the time of slavery to their current participation in the stock market.

Is there a need for a Black National Anthem? Absolutely! And maybe it’s time for a new one!””
— Ali Braswell

CHAPEL HILL, NC, US, September 30, 2021 /EINPresswire.com/ — Ali Braswell believes that a new Black National Anthem is needed for Black Americans and has launched an online petition and distributed a letter dated September 12, 2021 to NAACP Headquarters in Baltimore, Maryland and twenty state branches. She requested that the organization endorse the song, “Stand Up” by Cynthia Erivo and begin playing and singing it at future events.

“…I believe that Black Americans need a more actionable and empowering national anthem – one that motivates them to fight for their own freedoms and reach back to help other Black Americans do the same,” said Ms. Braswell in her letter to the NAACP. “Stand Up” is the featured song from the 2019 movie, Harriet, which tells the story of the heroic abolitionist, Harriet Tubman. That movie grossed over $40 million at the domestic box office, a rarity for specialty biographical dramas. And 49% of that revenue came from Black people.

Ms. Braswell went on to say, “…in light of the recent backlash and controversy over Vanessa Williams singing ‘Lift Every Voice and Sing’ during the annual PBS ‘A Capitol Fourth’ special and the NFL adding it to their major football broadcasts for the current season amid further backlash, I suggest that we give those who would oppose a unified and stronger Black community a more substantial reason for their agitation. Is there a need for a Black National Anthem? Absolutely! And maybe it’s time for a new one!”

From Slavery to Stock Market is a movement started by Ali Braswell, CEO and Founder of 4 La Vie Enterprises, LLC in 2020 to empower Black Americans to rise above their permanent underclass status by learning the best ways to approach, enter, and navigate the stock market. It is the name of her YouTube channel, her Instagram page, and her website, where a copy of her FREE 10-Point Program for Stock Market Ownership can be obtained. She also offers one-on-one consultations and classes.

Sókn Engineering at the forefront of the $20 billion predictive analytics market with their HyperFund Engine™.

Global Lazy Eye Market To Witness a Growth of 9.8% During the Forecasts 2019-2027: Stratistics MRC