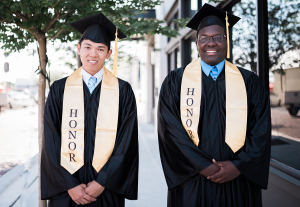 On May 23, two seniors overcome adversity to complete their high school education and tossed their caps in the air.

ORLANDO, FLORIDA, UNITED STATES, June 10, 2021 /EINPresswire.com/ — The Class of 2021 has overcome many challenges, and Edgewood Children’s Ranch seniors are no exception. For more than half a century, the non-profit organization has provided behaviorally challenged children and their families support through a Christ-centered approach to education, behavioral training, and spiritual development. On May 23, two seniors completed their high school education and tossed their caps in the air.

“The Ranch meant a lot for me and really helped change my life,” says Leon H., who graduated with honors from the Edgewood Ranch Academy last month. “Graduating at the Ranch also was important for me since I got to celebrate with people I’ve built bonds with over the past several years.”

Leon came to the Ranch when his single mom sought a safe place for him to work through anger issues and develop better communication skills. While his journey has been challenging, Leon remains focused on his goals: graduating high school and improving his relationship with his family.

“Leon has achieved both—and has grown into a determined, kind, intelligent young man who continues to grow his relationship with God and his family,” says Bruce Jordan, executive director of the program.

Another program participant, Stephane S., also graduated with honors from Edgewood Ranch Academy last month after coming to the program in middle school. At the time, he was failing all subjects and often in the principal’s office with little motivation to complete his schoolwork. With the help of Edgewood Children’s Ranch, Stephane developed a more positive outlook on life and made plans for his future.

“If the Ranch hadn’t helped me, I would not have graduated,” he says. “I’m so grateful for them taking me in time after time. I praise God for this miracle.”

Jordan agrees. “Over the past few years, Stephane has grown into a young man who understands the power of internal motivation, the importance of responsibility, and the value of developing a personal relationship with God.”

Former Edgewood Children’s Ranch participant John S. recently graduated from Apopka High School. He was a Rancher during his fourth- and fifth-grade school years, and his mom, Jennifer White, credits the program for helping John change his path and achieve his potential. John is joining the U.S. Marine Corps in September.

Edgewood Children’s Ranch is a residential program offering children who display negative social behaviors and their families hope through a Christian foundation to education, behavioral training, and spiritual development. The goal is for Ranchers to return to their homes, schools, and society as emotionally healthy young people.

Currently, housing 35 children ages 7 to 17, Edgewood Children’s Ranch has continued to change the lives of at-risk youth since it first opened its doors more than half a century ago. The program plans to expand its services to reach up to 56 children at a time.