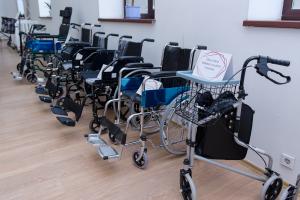 A medical equipment lending network for Jewish communities in Europe has opened its first center in Odessa, Ukraine and 26 more centers will open.

BRUSSELS, BELGIUM, July 13, 2021 /EINPresswire.com/ — One of the most pressing needs faced by many Jewish communities across Europe in the mouth of the covid crisis was the severe shortage of medical equipment to care for community members who were discharged from hospitalization and were recuperating at home due to restrictions and the pressures on the health care systems.

“The lending of medical equipment in the format used in Israel does not exist in many European countries and many members of the community simply could not afford to purchase the equipment. We identified this need arose from almost all our conversations with community leaders whose members contracted the disease,” said the European Rabbinical Centre’s General Director, Rabbi Aryeh Goldberg, which operates within the framework of the European Jewish Association (EJA)

He continued: “After a needs-based survey across the continent, we compiled a diverse list of equipment that will serve the members of the communities – free – from birth to old age,” says Rabbi Goldberg.

Rabbi Yossi Bainhaker, VP of the European Rabbinical Center who managed the project, said that each charity center includes over 300 items, including: oxygen generators, wheelchairs, bathing chairs, crutches, rollers, breast pumps, cots, TENS devices, blood pressure monitors and dozens more. In addition, the charity centers will also provide a maintenance service for the preservation, sterilization and repair of non-perishable medical equipment and accessories, and will manage a logistical system for the distribution and collection of the equipment and accessories to and in the homes of community members in need.

“The first charity centre on the network is already operating in the Ukrainian city of Odessa and more branches will open in the coming weeks. By the end of 2021, 26 charity centres will be lending medical equipment in the following countries: Ukraine, Belarus, Bulgaria, Latvia, Romania, Poland, Croatia, Kazakhstan, Moldova, Georgia, and Montenegro”, said Rabbi Beinhaker.

The chairman of the European Jewish Association, Rabbi Menachem Margolin, congratulated the staff of the European Rabbinical Centre on the professional and rapid response to the needs of the communities in implementing the initiative and announced that the association maintains contacts with medical professionals in various European countries.

“The inauguration of the first centre in Ukraine is an exciting milestone, said chairman of the Association of Holocaust Survivors in Odessa, Schwartzman Roman Markowitz. “Holocaust survivors were already given hot meals but, in many cases, could not get up from bed and go to the kitchen to eat them. Now, thanks to the Centre, we can also get free medical equipment.”