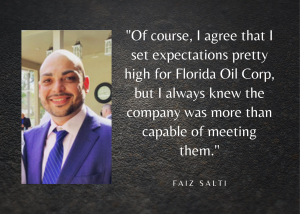 Faiz Salti, founder of the Florida-based retail gas station company, wishes to publicize its achievement of a 0.5% market share in the Sunshine State.

We will continue to expand throughout the state. We have no intention of slowing down. By the time 2024 rolls around, I fully expect that the company’s market share will be well above 1%.”
— Faiz Salti

TAMPA, FLORIDA, USA, September 24, 2021 /EINPresswire.com/ — When career businessman Faiz Salti made the decision to enter Florida’s highly-competitive retail gas station sector, he made himself a promise: before the third anniversary of his new company’s founding, which took place in late December of 2018, it would be a major force in the industry. After conducting some in-depth research into the matter, he made the determination that achieving a 0.5% market share would constitute the fulfillment of this promise.

According to official data compiled by the US Department of Energy, Florida is home to a few dozen more than 9000 gas stations, meaning that ownership of 92-93 gas stations would amount to a 1% market share, and ownership of 47-48 gas stations would amount to slightly more than 0.5%. Keeping these figures in mind, it is with a great deal of enthusiasm that Faiz Salti announces that, with the recent acquisition of its forty-seventh gas station, Florida Oil Corp has reached his ambitious initial goal with more than 12 weeks to spare before his self-imposed deadline.

“Of course, I agree that I set expectations pretty high for Florida Oil Corp, but I always knew the company was more than capable of meeting them,” says Salti, radiating a sense of well-earned satisfaction. “There was never a doubt in my mind. And the fact that we did it with a few months to spare is only a further testament to the abilities of our team.”

Addressing a question about Florida Oil Corp’s plans for the future, Faiz Salti does not hesitate to respond, “We will continue to expand throughout the state. We have no intention of slowing down. By the time 2024 rolls around, I fully expect that the company’s market share will be well above 1%.”

Florida Oil Corp owns and operates forty-seven gas stations across the Sunshine State, featuring locations in Orlando, Sarasota, Bradenton, Port Richey, Newport Richey, and Palmetto, among many others. Fiercely independent, the company does not affiliate itself with any single gasoline multinational, choosing instead to maintain stations under numerous banners, including such popular and trusted brand names as Chevron, Shell, Circle K, BP, Sunoco, Go Market, Thornton’s, and Mobil.

Anyone curious to learn more about Florida Oil Corp is encouraged to keep watch in the coming weeks for additional press materials relating to its recent business activities.

Faiz Salti is a veteran businessman and successful entrepreneur with fifteen years experience as a gas station owner to his credit. He is the founder, director, and registered agent of Florida Oil Corp, a company headquartered in Tampa, Florida that owns and operates forty-seven gasoline stations throughout the state.

Incorporated in December of 2018, the company is relatively new to the Florida gasoline retail sector, but has made spectacular inroads in its three years of existence. With its network of nearly four dozen gas stations across the state, Florida Oil Corp now accounts for more than 0.5% of Florida’s total market share of privately-owned gas stations.

Faiz Salti is also the co-founder and director of Faiz & Samad LLC, a sister company to Florida Oil Corp.