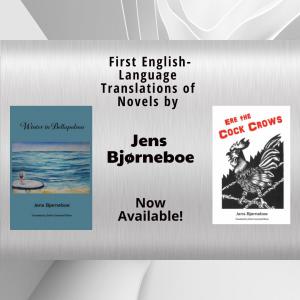 PHILADELPHIA, PENNSYLVANIA, USA, May 25, 2021 /EINPresswire.com/ — Although little known in the English-speaking world, the works of Jens Bjørneboe have been translated into a number of European and world languages and remain highly regarded in Scandinavia. Two early novels of Bjørneboe’s, Ere the Cock Crows and Winter in Bellapalma, are now available for the first time in English.

Bjørneboe’s chilling novel Ere the Cock Crows follows the ethical quandaries–or not–of Germans involved in Nazi concentration camps and human medical experiments in World War II. Dr. Reynhardt rejects Nazi ideology, while compartmentalizing his life as a loving family man and his work on horrific medical experiments performed on prisoners of war. Head of camp Heidenbrand is more self-aware of his Nazi complicity and his reasons for doing so–his own drive for power and wealth. The situation is complicated by the arrival at the camp of Samuel, a Jewish prisoner and childhood friend of both Reynhardt and Heidenbrand. Themes of man’s inhumanity to man, the ethics of modern science, and the responsibilities inherent in free will are explored, presaging concerns that continue throughout Bjørneboe’s body of work.

Originally written as a play but eventually published as a novel, this first English-language edition of Ere the Cock Crows includes a re-creation of the original play by the translator.

“…the material is relevant for an America that has recently passed through a traumatizing period—one that has provided a warning of how the strategies of fascist and racist regimes of the past can be introduced like a contagion into a democratic culture. Ere the Cock Crows is an artistic rendering of a worst-case scenario, of the institutionalization of cruelty under the auspices of the state. It’s a danger alive in the present.”—from the Foreword to Ere the Cock Crows, by Joe Martin, Johns Hopkins University

Winter in Bellapalma is a comic novel presenting the exploits of a community of expatriates living off-season in a small Italian fishing village: their lives, loves, and interactions with the locals, including involvement in a dispute between the fishermen and the town fathers who wish to promote the tourist industry.

A shorter, lighter read than most of Bjørneboe’s work, it nonetheless invokes social commentary with concise portraits of various personality types and the inevitable collision of values in modern life between greed/progress and traditional ways of life.

Author Jens Bjørneboe (1920-1976) was a Norwegian poet, playwright, essayist, and novelist who was arguably one of the most important writers of the mid-twentieth century. He was also a visual artist, a Waldorf School teacher, and a renowned social critic. His last major work was The Sharks (Haiene, 1974) and his most critically acclaimed were the three volumes making up The History of Bestiality trilogy; all have been translated into English by Esther Greenleaf Mürer.

Both works have been translated by Esther Greenleaf Mürer, a poet and translator who resides in Philadelphia. She has previously translated Bjørneboe’s novels The Sharks (Norvik, 1992), Moment of Freedom (Norvik/Dufour, 1999), Powerhouse (Norvik/Dufour, 2000), and The Silence (Norvik/Dufour, 2000) as well as a number of his essays and poems. She was responsible for the “Jens Bjørneboe in English” website, which was the premiere source of information about Jens Bjørneboe written in English and included translations of his poetry, essays, and excerpts of other works.