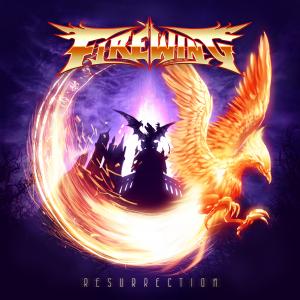 LOS ANGELES, CA, UNITED STATES, July 13, 2021 /EINPresswire.com/ — The band FireWing came up with a bold proposal to bring new perspectives to the Symphonic Metal scenario, with expert musicians getting together for the debut album, Resurrection, released by the renowned Massacre Records. Considering the feedback from the press and the public, this is the first step in a promising journey. Based in the USA, they have Brazilian and North American musicians who graduated from the Berklee College of Music, one of the most important in the world.

In addition to the extremely technical compositions, FireWing also draws attention to its deep lyrical content: “Our main purpose is to tell a story. We admire bands that have already done conceptual works, such as Angra, Avantasia, and Kamelot, and we believe that a story with characters that evolve is a way of talking about philosophical, moral and spiritual themes”.

About the album’s lyrical concept and how it’s related to the cover art, guitarist Caio Kehyayan explains: “As the album’s story is based on the conflict between two primordial mystical creatures, Ember the phoenix and Vishap the dragon, the cover features these characters in a chaotic world. In addition to the cover, there is an excellent work by our designer and illustrator Junki Sakuraba on the physical disc’s booklet pages”.

While the current situation in the world doesn’t allow the group to take the road to spread Resurrection around the world, they are working on other content and actions: “We intend to release material on social media such as videos playing the songs or explanations of the story and more. We have done a lot of interviews, due to the good acceptance of the album, which helps the promotion”, concludes the musician.

The album is available on major digital music platforms, as well as on CD.
https://lnk.to/firewingresurrection