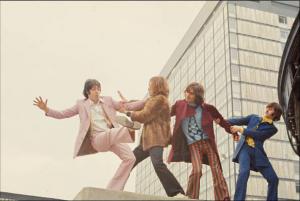 NEW YORK, NEW YORK, UNITED STATES, September 29, 2021 /EINPresswire.com/ — It was the early sixties when a young rock group from Liverpool create a musical style that took the UK by storm, then travelled throughout Europe and finally hit the USA like a. thunderbolt, The group was simply called The Beatles. And rock was never the sane again. And neither were fans.

Today, everyone knows the Beatles but do you know their fans? That is what this docufilm is about. The largest and ever growing music fan base in the world, It started in the 60s and has captivated every generation from the 20th into the 21st Century. If you ever attend a Beatles Festival (held throughout the world every year) you will see grandparents (original fans) and young teens dressed in 60s garb, blasting Beatles music on headsets between acts on stage.

This is what inspired filmmaker and Beatles fan, Simon Weitzman to make a film about the phenomena of Beatle fandom. “Here, There & Everywhere” celebrates the love affair people of all cultures and generations continue to have with the FAB4.

The film has had its ups and downs, but is still on schedule to be completed Spring of 2022, It survived the pandemic and collapse of PledgeMusic crowdfunding platform and it is starting a new crowdfunder on September 30th in the USA.

The film has amassed well over 200 hours of footage including content from fans all over the world. It is in process of being edited for Spring release.

Simon, a British network TV Director, teamed up with fellow filmmaker and fan, Andy Lee, 2 years ago. Simon has this to say, “Working with Andy has been a godsend to this project giving it another set of eyes and artistic viewpoint, And the fans themselves have made this epic journey so worthwhile giving us there friendship, time, and stories as well as donating generous artifacts to help us reach our target to complete the film. Those who donate will have their name immortalized in the film’s credit. We hope all the fans get to se the film and in many cases themselves in it, It really is a fan family effort.”

“Here, there & Everywhere is supported by the Cavern Club, The Casbah Coffee Club, The Fest For Beatles Fans, The British Beatles Fan Club, Abbey Road on the River, The Bootleg Beatles, The Hard Day’s Night Hotel and a world of fans, If you wish to subscribe go to Https://tinyurl.com/HTAEfilm.