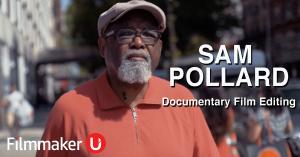 Samuel Pollard is a master filmmaker. If you say he’s just an editor or just a director, that’s not the whole story.””
— Director Spike Lee

NEW YORK, NEW YORK, UNITED STATES, September 27, 2021 /EINPresswire.com/ — Filmmaker U (www.filmmakeru.com), the online education series that brings the best in the industry to aspiring filmmakers, announced today that acclaimed Director/Editor Sam Pollard will teach a course in Documentary film editing. Oscar-nominated and multiple Emmy-winning documentary Director/Editor Sam Pollard (“Four Little Girls,” “When the Levees Broke: A Requiem in Four Acts,” “Sammy Davis Jr.: I’ve Gotta Be Me”), will take students into the edit suite in an intimate journey through his career, techniques, relationships and decision making process from his storied work. His collaboration with Director Spike Lee and his recent ventures as a Director; will give students an unparalleled look into non-fiction storytelling. Topics include Structure, Directors and Editors Shaping a Film Pacing, Mood, Tone and Texture, Editing Audio, Editing, and much more.

“Samuel Pollard is a master filmmaker,” Spike Lee said, with finality. “If you say he’s just an editor or just a director, that’s not the whole story.” – New York Times

Learn Documentary Editing with Oscar-nominated and Emmy-winner Sam Pollard Course costs $99 each and includes:
● 34 video lessons in each course (approximately 4 hours)
● Exclusive audio and video content in the Appendix section
● Additional videos of industry standards and practices
● PDF’s of industry standards and practices
● Glossary of industry terms
● Unlimited access to the class for multiple viewings
● Accessible from any device

About Sam Pollard
Sam Pollard is an Emmy Award-winning and Oscar-nominated director and producer. His films for HBO, PBS, and the Discovery Channel include the documentaries “Four Little Girls,” “When the Levees Broke: A Requiem in Four Acts,” “Slavery by Another Name,” “Sammy Davis, Jr.: I Gotta Be Me,” “ACORN and the Firestorm,” “Why We Hate,” “Atlanta’s Missing and Murdered: The Lost Children,” and the recently released “MLK/FBI.” Pollard also directed two episodes of the groundbreaking series Eyes on the Prize.

Since 1994 Pollard has served on the faculty of New York University’s Tisch School of the Arts. He is a member of the Academy of Motion Picture Arts and Sciences and lives in New York City.

About Filmmaker U
Filmmaker U is a collaboration of educators and innovators Josh Apter & Jason Banke of Manhattan Edit Workshop and Gordon Burkell at Aotg.com. This online seminar series was created to give aspiring and existing filmmakers unprecedented access to the lost art of apprenticeship in the film industry. Our instructors are acclaimed and award-winning artists who are the best filmmakers in the business.