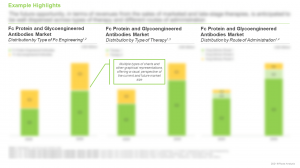 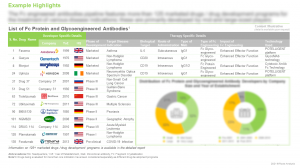 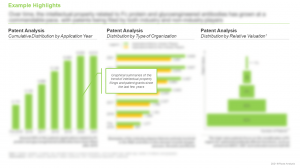 LONDON, ENGLAND, UNITED KINGDOM, October 20, 2021 /EINPresswire.com/ — With the emergence of blockbuster drugs, such as Gazyva® (for Chronic Lymphocytic Leukemia) and POTELEGIO® (for Sézary syndrome), Fc engineered antibodies have garnered significant interest in the medical community, for various clinical conditions

Roots Analysis has announced the addition of “Fc Protein and Glyco-engineered Antibodies Market, 2021-2030” report to its list of offerings.

To order this 250+ page report, which features 100+ figures and 110+ tables, please visit https://www.rootsanalysis.com/reports/fc-protein-engineered-and-glycoengineered-antibodies-market.html

Around 30 companies claim to be engaged in the development of Fc protein and glyco-engineered antibodies
Around 55% of the aforementioned players are large companies (with more than 5000 employees). It is worth highlighting that, majority of the developers engaged in this domain (54%) are based in North America, followed by Europe (26%) and Asia-Pacific (20%).

Over 1,800 clinical trials are currently evaluating the therapeutic effects of Fc protein and glyco-engineered antibodies, worldwide
It is worth mentioning that most of the trials were / are being conducted in North America (35%) region;
however, more than 91% of the patients enrolled in trials conducted in North America were enrolled in different sites in the United States. Further, 43% of the trials are being sponsored by non-industry players.

Close to 140 grants have been awarded to support research on Fc protein and glyco-engineered antibodies, since 2019
An estimated USD 63 million in grants have been awarded to various companies / organizations working in this domain, during time period between 2019 and 2021. Almost 50% of the total grant amount was funded by the National Institute of Allergy and Infectious Diseases.

Close to 6,500 patents have been filed / granted for Fc protein and glyco-engineered antibodies, since 2016
Around 30% of these intellectual property documents were filed / granted in the Asia-Pacific; with maximum number of patents filed in Australia. This is followed by North America (32%) and Europe (23%). Leading industry players (in terms of the size of intellectual property portfolio) include Roche, Janssen, Novartis, Genentech, Amgen, MacroGenics and Genmab.

Partnership activity within this domain has grown at a CAGR of 48%, between 2016 and 2020
More than 50% of the total deals have been inked post 2019. Licensing (36%) emerged as the most popular type of partnership model adopted by stakeholders in this domain, followed by clinical trial agreements (16%) and acquisitions / mergers (14%).
The market is anticipated to grow at a CAGR of over 30%, during the period 2021-2030
Growth in this domain is anticipated to be driven by the drugs that are being developed for the treatment of oncological disorders. North America (primarily the US) and Europe are expected to capture major share of the Fc protein and glyco-engineered antibodies market by 2030, in terms of the sales-based revenues.

To request a sample copy / brochure of this report, please visit this https://www.rootsanalysis.com/reports/fc-protein-engineered-and-glycoengineered-antibodies-market/request-sample.html

The financial opportunity within the Fc protein and glyco-engineered antibodies market has been analyzed across the following segments:

View More Posts
Previous Article The spike in geriatric population and infectious diseases worldwide boosts the swab market globally for next 10-15 years; according to a study conducted by Kenneth Research.
Next Article The innovations and advancements in medical technology boosts the automated hospital bed market globally; according to the research conducted by Kenneth Research.

Trade Finance Market Report In terms of service types, In 2019, the proportion of Letters of Credit is the largest market share, accounting for about […]